All you need to know about the humble Snowdrop… 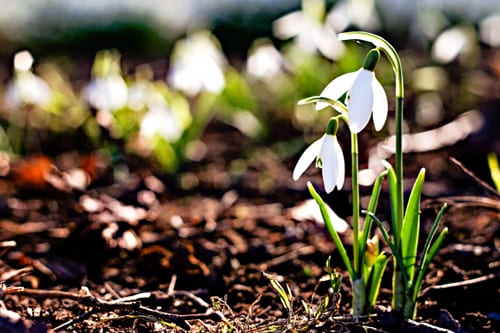 I’m a huge fan of photographer Katie Spicer’s beautiful floral images.  So, I asked her if she would like to write a guest blog post for Flowerona…and she chose the harbinger of spring, the snowdrop.

Over to you Katie…

There are few things as thrilling as seeing the first snowdrop of the year. Their delicate white petals bobbing in the breeze and if you are lucky enough to see a whole host of them, you could catch the very faint but sweet, honey-like perfume they give off.  They are said to symbolise purity and the cleansing of the earth, and when worn, the wearer will have pure thoughts. 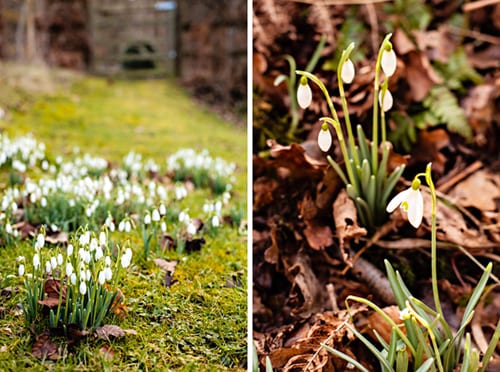 They are known as the Flower of Hope and you can understand why when they are one of the first flowers we see blossom after an often bleak and long winter, giving us hope of spring.  It is such a welcome sight to see them nestled in the hedgerows and in gardens.  If you get the opportunity to visit somewhere such as Welford Park near Newbury to see them in their masses, you will be rewarded with the sight of a truly breathtaking white woodland carpet. 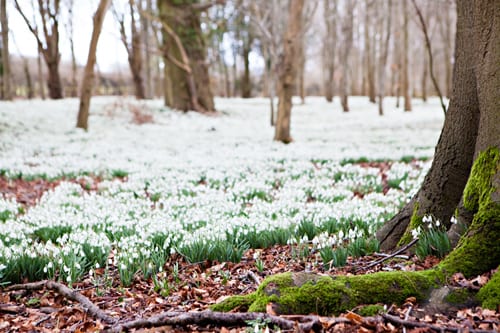 They aren’t native to this country.  They are naturally found in alpine areas and so have adapted to survive snowy conditions.  Hearsay says they can generate their own heat to melt the snow around them (thermogenesis) but there is no scientific proof of this.  They do however have a special protective leaf at the top of the stem that lets them push through the layers of snow, giving them the name “snow-piercer”. 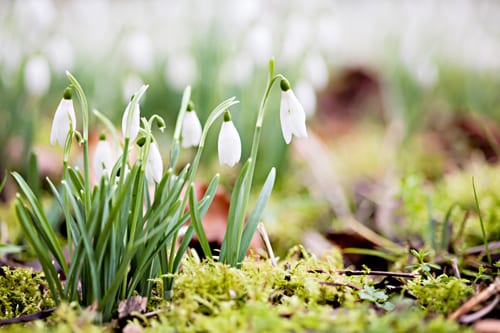 These tiny white bulbs not only give us great pleasure to look at on a winter’s day, they actually have numerous medicinal properties as well. They produce an alkaloid called Galanthamine (from their Latin name “Galanthus”), which has been found to be effective in the management of Alzheimer’s. Scientists have now discovered how to create artificial Galanthamine, which is marketed under the name Reminyl.  They are also useful in the treatment of neuralgia and traumatic injuries to the nervous system.

I have always been fascinated by ethnobotany, the study of how people use plants.  We are very lucky to not only be surrounded by floral beauty but to have the ever-increasing knowledge of how they can help us.  Being able to combine my love of flower photography and their ethnobotanical uses is a real pleasure for me.

The humble Snowdrop or Milk Flower is also an effective insecticide.  Studies show that pest resistance in GM crops such as tobacco and tomatoes could be increased.  It’s potential in the battle against HIV is also being looked in to.  Who would’ve thought such a fragile, white flower could have so much going for it? 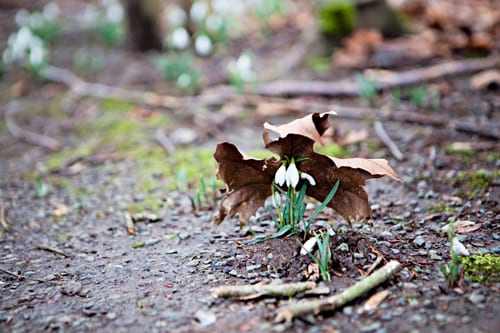 They even have a cult following, obsessed collectors and avid fans being called galanthophiles! Snowdrop mania has caused the price of certain bulb varieties to range from £60 to £360 for a single bulb.

German legend has it that when God made everything on the Earth, he asked the flowers to give some of their colour to the snow.  One by one the flowers said no.  The snow then asked a snowdrop to give her some of its colour and it accepted.  The snow then rewarded the snowdrop by letting it bloom first.

There is also an English legend, beautifully transcribed in the poem “Origin of the Snowdrop” by George Wilson, that tells of Adam and Eve being banished from the Garden of Eden.  Eve, surrounded by her first sight of snow was weeping for the balmy delights of the garden when an angel took pity on her and blew on to a handful of snowflakes, turning them into snowdrops.  He told her it was a sign of spring and summer to come. 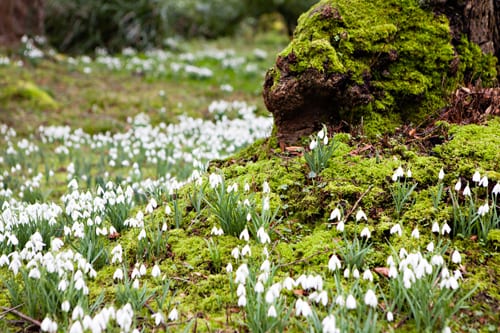 According to folklore. it is bad luck to bring them inside the house but they look so lovely framed against their natural, green landscapes, why would you anyway?

Thank you so much Katie for today’s blog post! I learnt a great deal from it and hope you’ve enjoyed reading it too.  If you’d like to see snowdrops this spring in the UK, here are just a few other places where you can find them:

And if you’d like to see more of Katie’s beautiful flower photography, do visit Katie’s website.  You may also like to read my interview with her on Flowerona last year.

A very warm welcome! My name is Rona Wheeldon and I’ve made it my mission to inspire and support the floristry industry. I’m passionate about this incredible sector and everyone involved, rooting for florists, flower growers and flower wholesalers.
END_OF_DOCUMENT_TOKEN_TO_BE_REPLACED

Photography is the focus of this week, Week 4, on

Floristry demonstrations were in abundance at @the