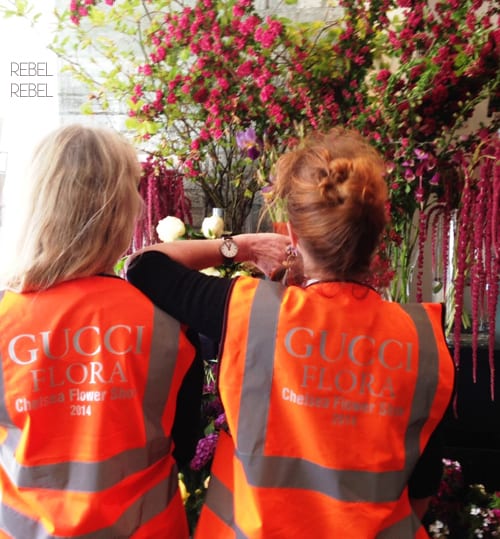 I’m really looking forward to the RHS Chelsea Flower Show next week. And as it’s Florist Friday, I thought today that I’d take a look at some of the florists who are involved in the show, starting with Rebel Rebel.

For the first time, Gucci are creating a garden in the Fresh Gardens category at Chelsea and it’s been designed by Sarah Eberle. Pictured above are Mairead Curtin and Athena Duncan from Rebel Rebel in their wonderful Gucci hi-vis jackets! They’ve assisted Sarah with the creation of the ‘Flora Garden’.

Since the Gucci Flora motif debuted in 1966 in homage to actress Grace Kelly, following a visit by the then Princess Grace of Monaco with her husband Prince Ranier to the Gucci Milan boutique, it has become one of the most well-loved and recognisable icons of the Italian House. Gucci will be bringing Flora, which is dedicated to the four seasons, to life with their Chelsea garden. The original design was commissioned by Rodolfo Gucci, one of founder Guccio Gucci’s sons, who wanted to present Princess Grace with a special gift. He commissioned artist Vittorio Accornero to create a floral pattern for an original silk scarf as a symbolic bouquet. 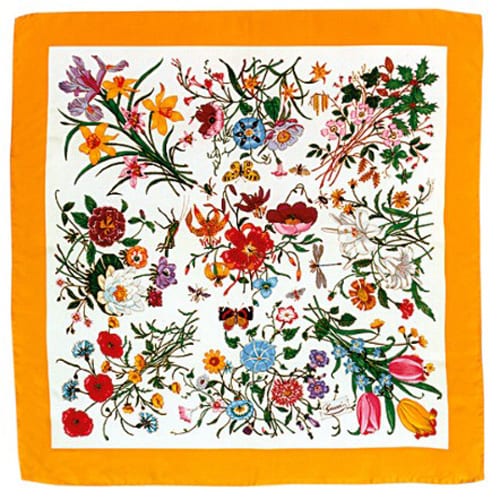 And here’s an illustration of the garden… 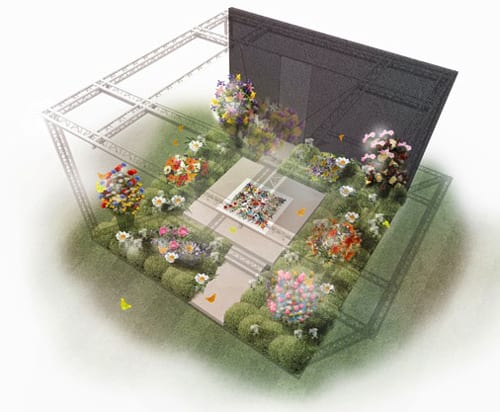 Looks like my idea of ‘Flower Heaven’ and I can’t wait to see it! 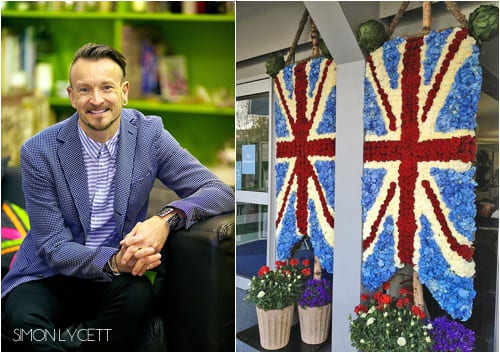 Last year, Simon Lycett created the Union Jack flag designs above for the entrance to the Floral Design Marquee. And for the 2014 show’s marquee, his design will be modelled upon this year’s show logo. He and his team will be installing it on Sunday afternoon! Simon’s also taking part in TV and radio coverage:

Judith Blacklock and her team have been commissioned to make a floral dress for M&G Investments. It will take pride of place on their Show Garden on Press Day on Monday. You can also see an image here of a dress which Judith made using Vanda Orchids, earlier this week.

So, that’s a round-up of some of the florists taking part in this year’s show and lots more will be involved with Chelsea in Bloom. I’ll be visiting the the RHS Chelsea Flower Show every day next week, providing you with lots of coverage on Flowerona. Do let me know if there’s anything in particular that you’d like me to feature…

A very warm welcome! My name is Rona Wheeldon and I’ve made it my mission to inspire and support the floristry industry. I’m passionate about this incredible sector and everyone involved, rooting for florists, flower growers and flower wholesalers.
END_OF_DOCUMENT_TOKEN_TO_BE_REPLACED