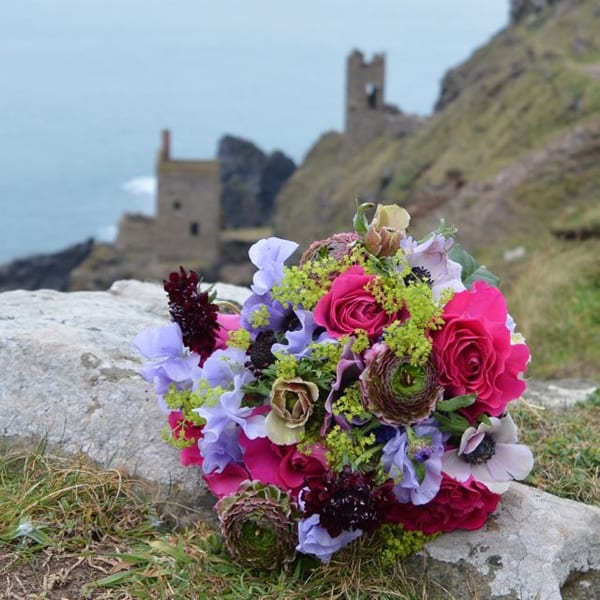 In this week’s Florist Friday blog post, I’m delighted to feature an interview with Hazel Shaw from Eden Blooms. Hazel is running ‘Flowers Inspired by Poldark’ courses in October and next March in Cornwall.

Tell us about your ‘Flowers Inspired by Poldark’ course…

So many of us loved watching Demelza arrange her flowers at Nampara and still dream of the overflowing rose bowls from Trenwith that we’re offering an exclusive half day flower course, being held in the heart of beautiful Poldark country – Cornwall! We hope to take our students back in time by creating Georgian style flower arrangements with them that they can then take home and treasure. It will also include special demonstrations on how to recreate Demelza and Verity’s wedding bouquets from Series 1, originally created by Phillip Taylor Corps.

We want to be able to show students how to create that very natural gathered from the garden look, which was so popular then and still is now, whilst demonstrating some of the more formal floral arrangements of that time period too. And after all the interest in the TV series, it seemed a very natural fit to create a course that combined historical flowers in a beautiful setting. We want our students to leave as in love with historical flowers are we are.

What prompted you to run the course?

I’m sure you can guess by now, but all of us at Eden Blooms have a big interest in Poldark and when the series came to an end, we were left feeling rather blue. So, more for us than anything else, we posted on one of our social media channels a picture of a cornflower with ‘Anyone else missing Poldark?’ and got the biggest response anyone could imagine. We knew then that there were others out there who shared our love of history, flowers and Aidan!

When we re-launched our flower school in 2015, we decided we wanted our courses to be different to everything else out there. We therefore designed the whole ethos of the school around bringing a flower course to our clients. And after Poldark and the response that one social media post received, we knew that there was a demand to learn about historical flowers. We really enjoyed sourcing the locations and for both the courses we’re running, the venues have been very excited to work with us and hold on to the love of the TV series.

It’s also a personal thing. We’ve always known that our family were originally Cornish, what with a name like Tremayne. But after watching the Poldark series, I decided I wanted to find out more about our family history. I was bowled over to trace my family back from 1890 (when they left Cornwall) to 1490. I even discovered that one of my ancestors worked in a mine in Cornwall – all very Poldark! On my trips to Cornwall for the research, I thought it would be so lovely to work in Cornwall. However it’s not commercially viable to expand our wedding business in Hampshire to Cornwall. But running courses there allows us to bring our flowers to this beautiful county and have another excuse to visit! 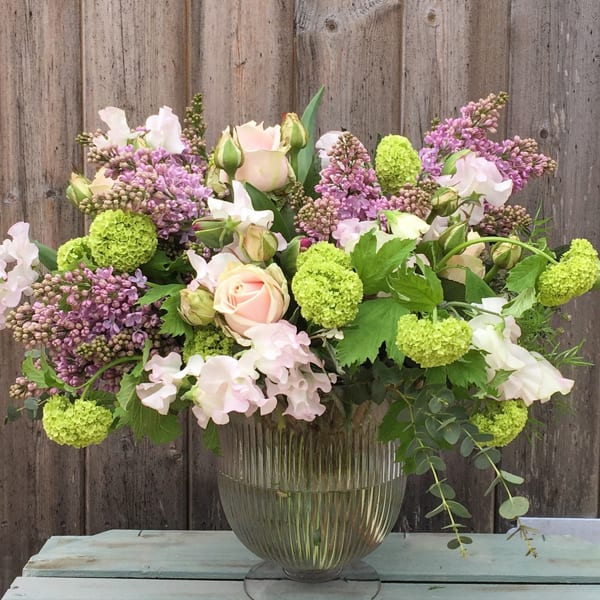 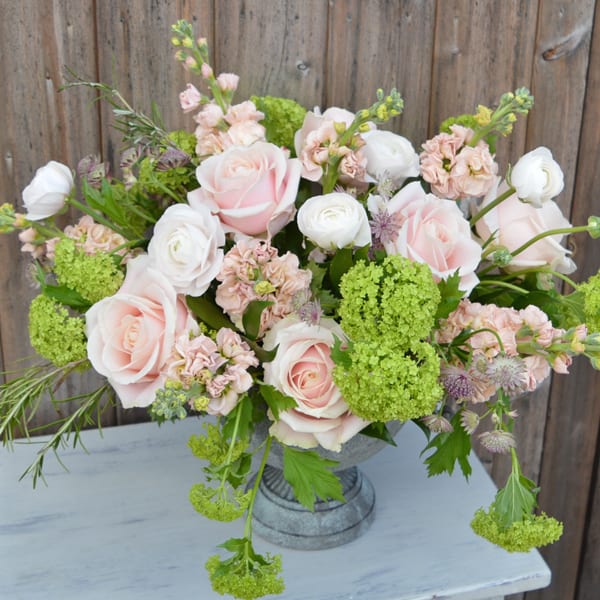 Why is it you have such an interest in the historical aspect of flowers?

As part of our Higher Diploma in Floristry Course at Merrist Wood, we studied all the periods of floral arrangement from Roman times up to the 1960s. I adore history as it is (I did a History A Level when I was 30) and combining the two passions of history and flowers was a major draw for me to do the course. This historical training has put me a great position to advise film and television companies on which flowers would have been available, typically used and how they were displayed at the time their production is set.

And what is it you love about the Georgian period in particular?

I adore the softness of the arrangements and the shades of pastel in the flowers that tumble effortlessly from silver rose bowls or gorgeous china containers. The flowers of the time also include many of my favourites such as English garden roses, which are just so delicate and gorgeous. Garlanding was also popular in Georgian times and not just for Christmas. This is a trend that has re-emerged hugely this year and we’re having great fun making many different styles. I also love that the reason behind flowers has changed so much. Back then, flowers were used mainly to mask unpleasant scents from unwashed clothes and open sewers! On the more romantic side, they were also used to decorate and show off the home. Plus there were used for herbal remedies. For example, tanacetum (feverfew) was used to cure migraines. 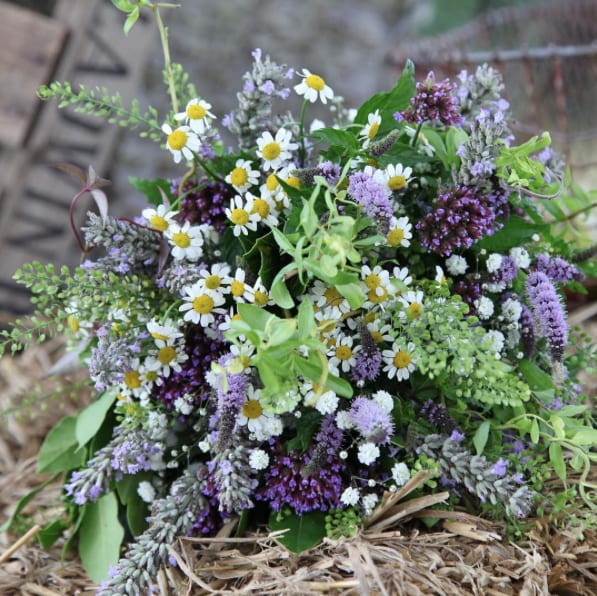 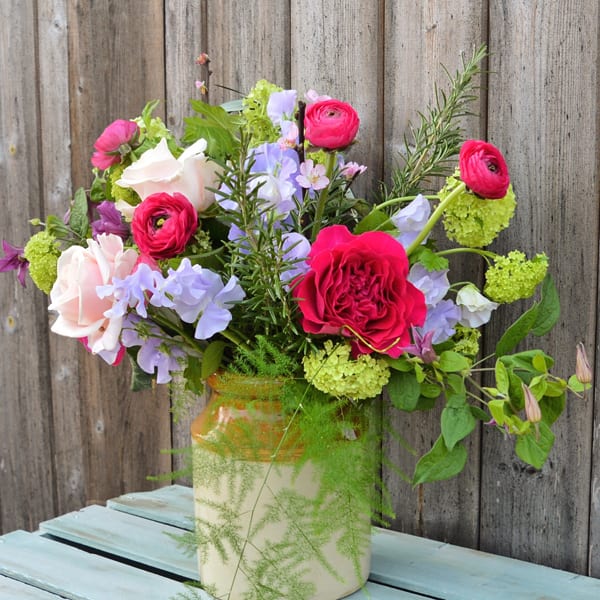 Social media wise, you’ve set up Poldark related accounts. Could you tell us about them?

After attending your Social Media for Florists workshop back in February 2015, I launched the Eden Blooms Instagram account. I remember being told that you must keep your social media posts topical. The day after the Poldark Series 1 finished, I posted the image I mentioned above of the cornflower. And I genuinely couldn’t believe the reaction to this one piece of social media that was more for our blue hearts than anything! Before long, we were using Poldark and Cornwall as a regular theme in our social media messages. Following a review of our social media in February this year, it was clear that our wedding business and Poldark inspired flowers were getting mixed up. So I decided to separate the two and we haven’t looked back since!

Since the account has started, we’ve generated so much interest and follows from avid Poldark fans. But more importantly, we caught the attention of several of the actors and crew from the series who now follow us. Every image gets many retweets on Twitter and up to 90 likes on Instagram which I’m thrilled with. It was clear from day one that people loved our flowers and the Georgian, Cornish twist to the posts. And people were asking to buy flowers and come on courses.

I’ve even had the pleasure of meeting two actors from the series (Mrs Zacky Martin, pictured below and George Warleggan) and the Writer/Executive Producer Debbie Horsfield who said she’d seen our flowers on Twitter and Instagram and that they reminded her of Demelza! I mean wow!

Something that proved really popular on our social media was when we recently delivered flowers to Cornwall to one of the Poldark actresses. I then used this time to conduct a Lonely Bouquet Campaign, where we left bouquets all around Cornwall in places for some of the actors, actresses and avid fans to discover and then take home and enjoy.

Off the back of all of this, we’ve been in discussion with several Film/Television Production companies about creating floral props for their projects. Social media really is a powerful connection tool! 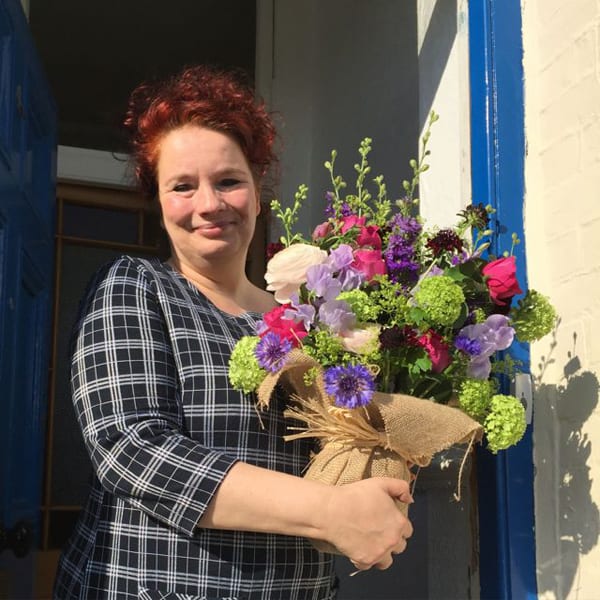 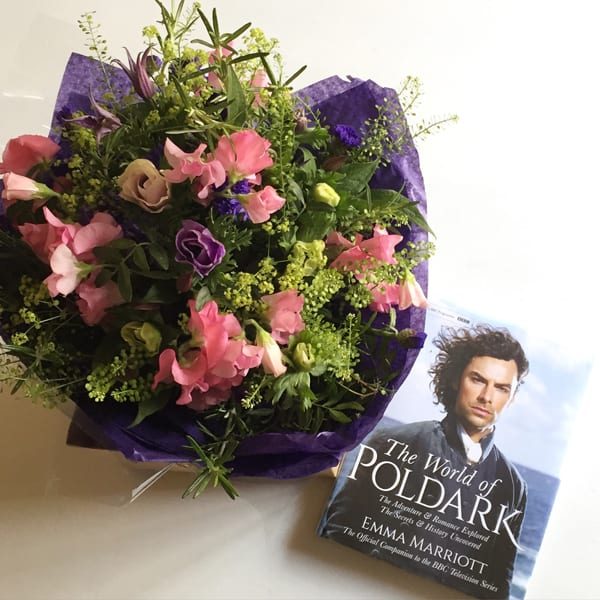 Do you know when the next Poldark series will be televised?

As I’m not the florist who provided the flowers for Series 2, I sadly have no insider knowledge. However being part of the Poldark Twitter community I know that Series 2 will be coming about in the autumn of 2016 and we’ll be treated to 10 episodes of Cornish loveliness. Sadly, a third series has not yet officially been commissioned but the main man did let it slip that perhaps production for it might commence in Sept 2016…

(Disclaimer – Eden Blooms does not provide the flowers for BBC’s Poldark and has no official association with Mammoth Screen and its associates. Eden Blooms creates flowers ‘inspired by Poldark’ for our Social Media sites.)

If you’d like to attend one of Hazel’s ‘Flowers Inspired by Poldark’ half day courses, they’re taking place on October 8th 2016 at Cowslip Workshops, Launceston and on March 19th at Gwel an Mor in Porthreath. Poldark Flowers can be found on Instagram and Twitter.

P.S. Here’s a link to an interview with Hazel, if you’d like to read more about her and her company, Eden Blooms.

A very warm welcome! My name is Rona Wheeldon and I’ve made it my mission to inspire and support the floristry industry. I’m passionate about this incredible sector and everyone involved, rooting for florists, flower growers and flower wholesalers.
END_OF_DOCUMENT_TOKEN_TO_BE_REPLACED