Floristry workshop by Simon Lycett at the Spirit of Summer Fair 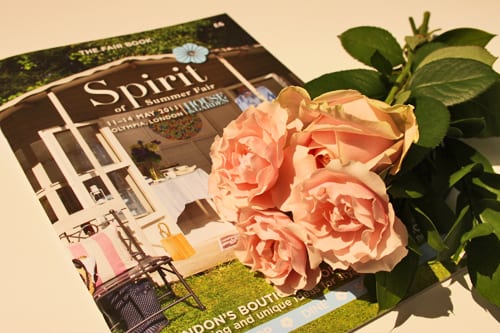 Last Friday, I attended the Spirit of Summer Fair at Olympia in London.  The show hosted over 300 exhibitors with products ranging from fashion, jewellery and travel accessories to homeware and garden accessories.

Whilst there, I took part in one of the Summer Lifestyle Workshops conducted by London-based florist, Simon Lycett.

If you’re not familiar with Simon, he’s been creating flower arrangements for every type of event since 1993, when he arranged  flowers for the film Four Weddings and a Funeral. His work now appears in UK magazines including House & Garden, Homes & Gardens, Hello, OK! and Tatler.

He’s also provided fabulous floral decorations for the films Avatar, Clash of the Titans, Young Victoria and the film premieres for Sex and the City 2, Quantum of Solace, Calendar Girls and Love Actually.

Following Simon’s guidance, we made a nosegay of beautiful soft pink roses and foliage. 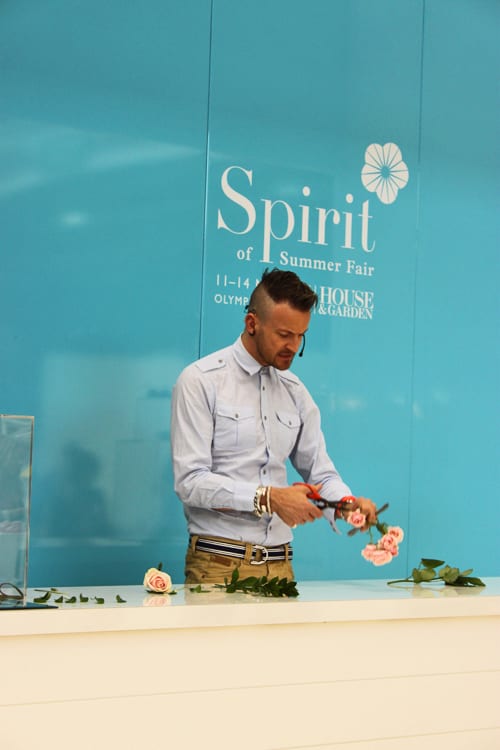 First of all, we took some hard ruscus leaves and wired them using silver wire, so that they could later be bent into position.  Then we used green Stemtex tape to seal in the leaf moisture and cover the wire.  Next, we made loops of china grass, wired and taped them.

We then took the large rose, our focal flower, and cut off the stem leaving about an inch.   We pushed a sturdy green wire up the stem just into the bloom, inserted a silver wire through the calyx and wound it down around the green wire, which we then bound with Stemtex tape.

Wiring the accent flowers, which were spray roses, was the next task.  We inserted a silver wire into the calyx under each bloom, twisted it and then covered the wire with tape.

And below is a picture of all the wired and taped components. 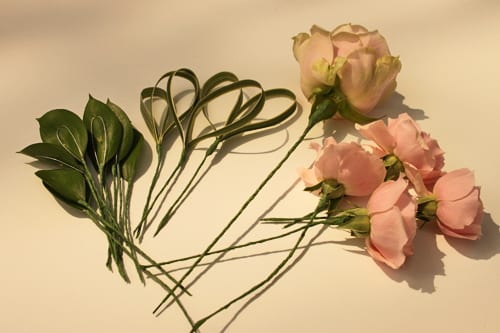 To construct the nosegay, we took the focal rose, then arranged the accent flowers and foliage around it in our hand.  When we were happy with our design, we secured the stems by binding them with a silver wire.  Then, to make the design as light as possible, we trimmed off any surplus wires.

The last stage was to bind Stemtex tape around the wires, ensuring all of them were covered, especially the sharp ends.  And here’s a photo of my finished nosegay. 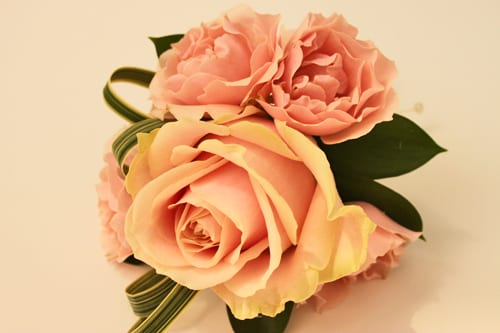 I later did a little research about the term nosegay.  Apparently, this type of design has existed in some form since at least medieval times.  Then they were carried or worn around your head or bodice to mask the unpleasant smells of the time – literally, to keep the nose gay…as in to keep the nose happy!

It’s a long time since I’ve done any wiring and I so enjoyed making this nosegay.  It can be quite fiddly and takes a bit of practice, but I love the intricate nature of putting together wired designs such as this.

And once you’ve mastered these skills, you can also make buttonholes and corsages, plus bouquets like Kate’s!

A very warm welcome! My name is Rona Wheeldon and I’ve made it my mission to inspire and support the floristry industry. I’m passionate about this incredible sector and everyone involved, rooting for florists, flower growers and flower wholesalers.
END_OF_DOCUMENT_TOKEN_TO_BE_REPLACED

Changing Career From a Wedding Florist to a Flower

'All you have to do is to pay attention; lessons a

Changing Career From a Wedding Florist to a Flower

'All you have to do is to pay attention; lessons a

'If we want to feel an undying passion for our wor