Next week, the RHS Chelsea Flower Show takes place in London, when it celebrates its centenary.

So today, as it’s Florist Friday, I thought I’d take a look at some of the florists who are involved in the show and Chelsea in Bloom. 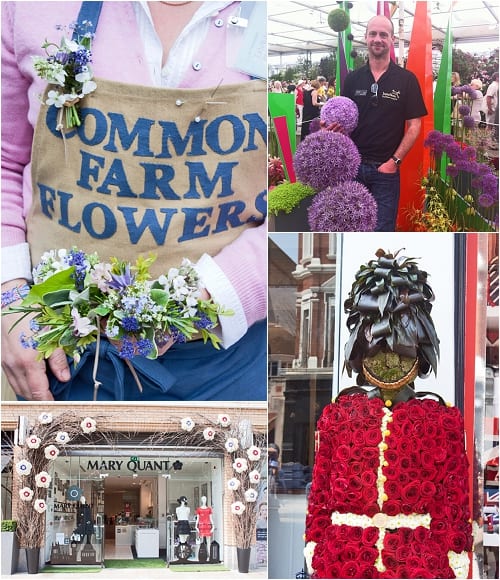 Georgie Newbery of Common Farm Flowers will be assisting garden designer Jo Thompson with her Chelsea in Bloom window for Peter Jones.

Nik Southern of Grace & Thorn will be teaming up with LK Bennett to design their Chelsea shop windows for Chelsea in Bloom.

Celebrating floristry expertise over the past nine decades, Interflora’s design exhibit, entitled ‘Time Frames’, takes influences from art, fashion and pop culture from the 1920s to the present day.

Each florist has their own section of time to interpret and will use popular flowers from the era, as well as some authentic props, to bring it to life.

Joe Massie will be competing in the RHS Young Chelsea Florist of the Year competition.

His design will be on display from Monday morning through to Wednesday evening.

He’s also had to produce an A3 poster explaining his design inspiration and how he’s linked it to the history of the RHS Chelsea Flower Show.

This Chelsea marks the fifth consecutive year that Joe will be competing at Chelsea. He says:

‘I guess I’m aiming for my fifth Gold Medal, and my fifth Best in Show award. If I’m successful, I’ll be the only floral designer ever to achieve this…… We’ll see!’

‘Far Below the Sea Blooms’ is the name of this year’s NAFAS (National Association of Flower Arrangement Societies) exhibit.

Created by florists from the Scottish Area of Flower Arrangement Societies, the design has been inspired by underwater coral reefs. 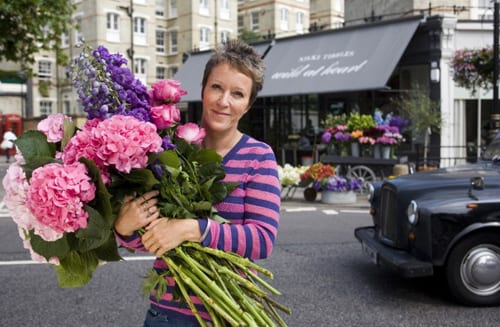 Nikki Tibbles and Wild at Heart will be showcasing the company’s nationwide bouquet delivery service and will be launching their new website. 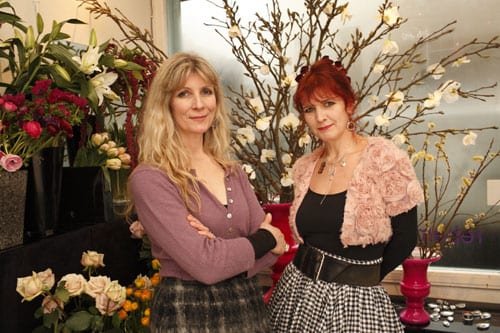 Rebel Rebel will be helping Kelways with their exhibit at the show.

They will be assisting them to celebrate their glorious history, using many of the flowers and vegetables that Kelways were famous for at the time of the 1913 show, 100 years ago. 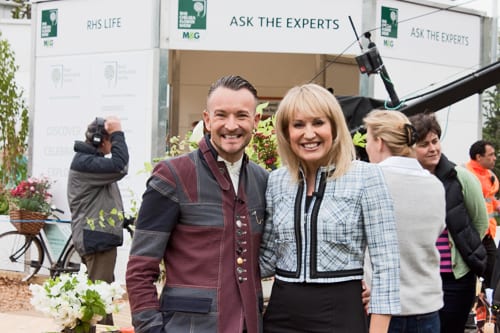 Simon Lycett has designed and will be creating the décor for the entrance to the floral decoration marquee, with a very patriotic Chelsea 2013 theme.

He will also be appearing on the BBC next Friday with Nicki Chapman talking about the dianthus (carnation), which has become synonymous with wedding buttonholes and garage forecourts.

With Nicki, Simon will be talking about Mrs Desmond Underwood, a Chelsea exhibitor from the 1950s who made the dianthus a cutting edge addition to every flower arrangement.  And he’s planning to give these poor relations of the floristry world, the majestic make-over they deserve, on camera.

If you’d like to meet Simon, he will be in the RHS Great Pavilion from 8am till 2pm, Tuesday to Thursday. So, if you’re at the show, do go and say ‘Hi’!

The Covent Garden Academy of Flowers

This year, The Covent Garden Academy of Flowers will be decorating their stand in the 1920s style to celebrate the centenary show.

They will be dressed up in 1920s garb too…pearls, flapper dresses and feather boas.

Gillian Wheeler, the Principal of the Academy, will be giving a live floristry demonstration with Nicki Chapman on the BBC on Wednesday lunchtime…so watch out for that too! 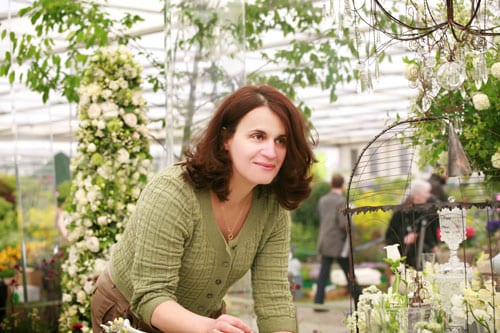 Zita Elze is preparing something very special for the M&G Investments Centenary Garden, which will be revealed to the press on Monday morning.

I’m so looking forward to visiting the show and I’m currently planning to be there every day, starting with Press Day on Monday.

If you’re going, I hope you have a wonderful time and do visit the Interflora, Kelways and NAFAS exhibits, The Covent Garden Academy of Flowers and Wild at Heart stands…and of course, go and say ‘Hello’ to Simon.

Or alternatively, enjoy the show from the comfort of your home, by watching all the BBC TV coverage which starts on Sunday on BBC1 at 5pm.

And if you are in Chelsea next week, I highly recommend taking a walk around to see all the shops taking part in Chelsea in Bloom.

A very warm welcome! My name is Rona Wheeldon and I’ve made it my mission to inspire and support the floristry industry. I’m passionate about this incredible sector and everyone involved, rooting for florists, flower growers and flower wholesalers.
END_OF_DOCUMENT_TOKEN_TO_BE_REPLACED

'You have to stop doing what everyone else is doin

Florists and flowers growers from the UK, Ireland,