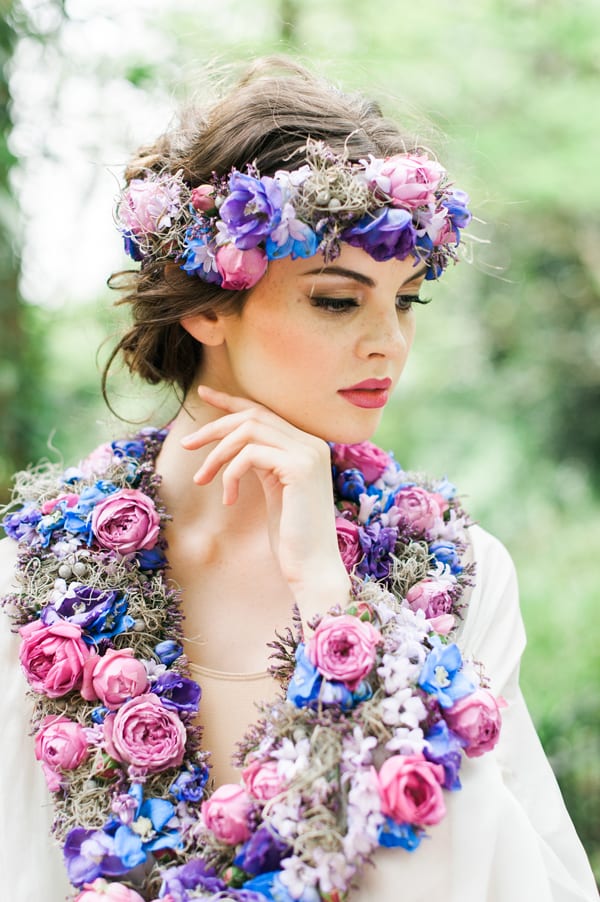 Today, I’ll be at the RHS Chelsea Flower Show Press Day and I’m so looking forward to seeing all the gardens and exhibits! All my blog posts this week will be Chelsea related and I thought that I’d start with details of florists who are involved in this year’s RHS Chelsea Flower Show, Chelsea in Bloom and Chelsea Fringe.

Larry Walshe was commissioned by M&G Investments to create this bespoke dress made of over 1,200 flowers, to celebrate their sixth consecutive year as title sponsor of the RHS Chelsea Flower Show. The intricate floral embroidery detailing features delphiniums, spray roses, brunia, hyacinths and limonium. 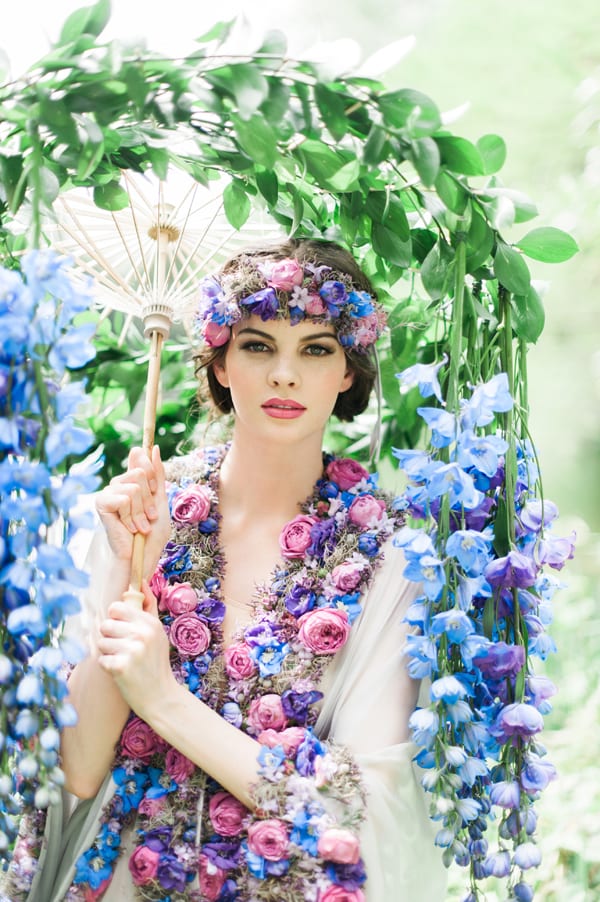 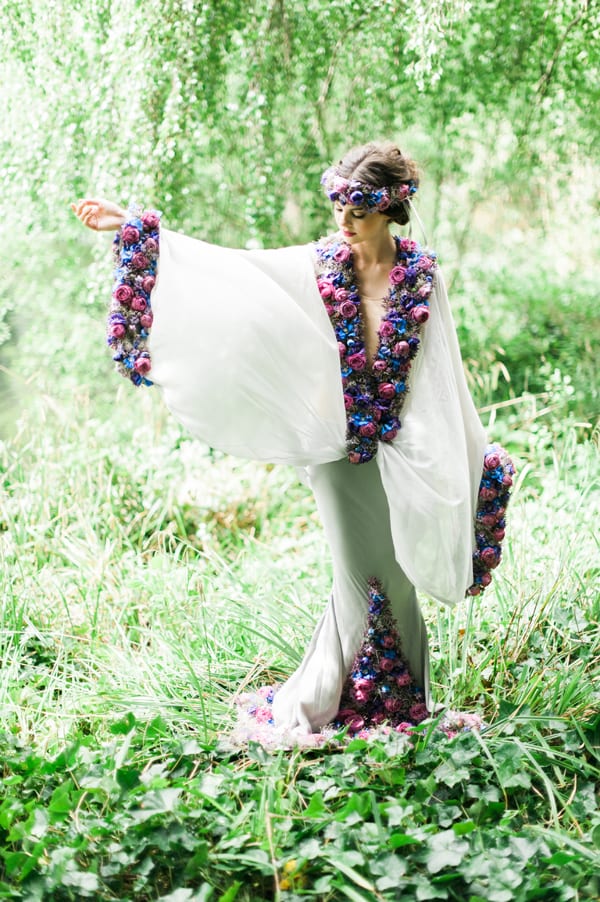 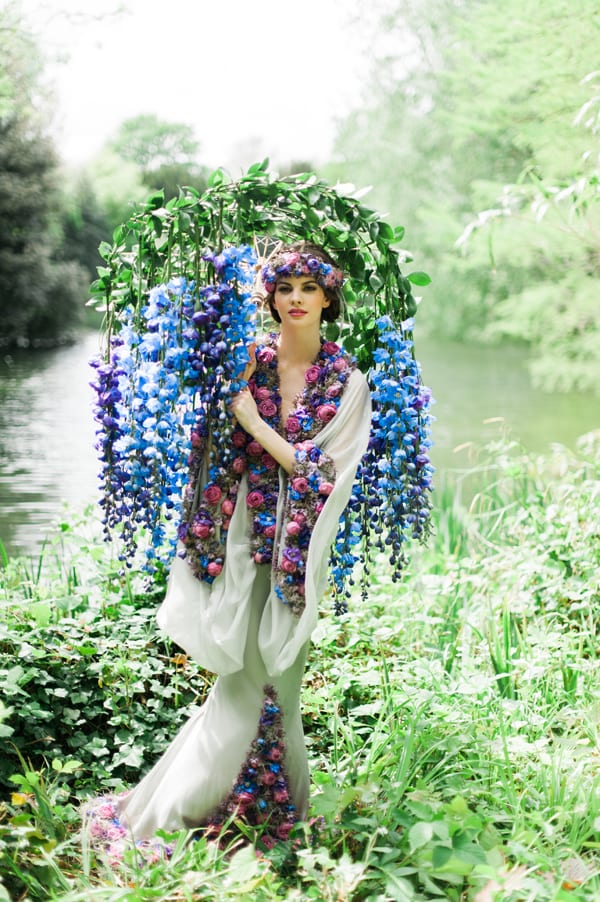 Here’s a link to a video showing the making of the dress. Larry will be creating a further piece to be seen in Jo Thompson’s show garden for M&G Investments at the RHS Chelsea Flower Show. And as part of Chelsea in Bloom, he will be creating an installation for No. 11 Cadogan Gardens, a hotel located just off Sloane Street.

Simon Lycett will be at the RHS Chelsea Flower Show today, when his bouquet will be presented to HM The Queen. He will also be at the show on Tuesday afternoon walking round with Jo Good, live on BBC Radio London. And on Friday morning, Simon will be presenting for the BBC.

In the Great Pavilion at the RHS Chelsea Flower Show, Philippa Craddock has created an afternoon tea-inspired floral extravaganza for Atlantis, The Palm hotel in Dubai. She will also be creating all the floral designs for Fortnum & Mason’s hospitality area in the Chelsea Oasis and President’s Marquee.

Okishima & Simmonds have made a botanical-inspired dress and headdress for Hillier Nurseries & Garden Centres for Press Day. I’ll be featuring a ‘Behind the Scenes’ blog post about the inspiration and creation of the designs on Flowerona shortly!

Shane Connolly has created the shop window for Cassandra Goad, a jeweller on Sloane Street, for Chelsea in Bloom. The design is inspired by the 30th Anniversary of the business.

For Chelsea in Bloom, Wild at Heart are collaborating with Kate Spade New York and Monica Vinader to create magical floral masterpieces for this year’s Fairy Tales theme.

Victoria Flowers and Foxgloves + Glory has dressed the window of the new Sarah Chapman store for Chelsea in Bloom.

Linda Cottee is creating designs for Chelsea in Bloom for Club Monaco and The White Company.

As part of Chelsea Fringe, Rebel Rebel made floral headdresses for the lady rowers taking part in the Floral Flotilla at Henley-on-Thames.

For Chelsea in Bloom, Moyses Stevens have created a ‘Mirror, Mirror, On the Wall’ setting, with poison apples and apple trees. The display depicts the tale of ‘Snow White and the Seven Dwarves’. They’ve also been commissioned by the InterContinental Hotel with Floris to create an afternoon tea structure.

Jam Jar Flowers have been involved in the creation of Brora’s Little Red Riding Hood design for Chelsea in Bloom.

By Appointment Only Design

For Browns, By Appointment Only Design have created a wonderful carriage for Cinderella for Chelsea in Bloom.

As part of Chelsea Fringe Henley, Jo Wise of Floral Circus is holding an evening of alternative floristry on June 3rd. She will be creating a fresh flower dress inspired by a Matisse painting using local flowers and foliage gathered from nearby gardens. There will also be a guest mixologist creating fresh flower cocktails.

Florists will be taking part in the RHS Chelsea Florist of the Year and RHS Young Chelsea Florist of the Year competitions at the show. Their task is to create a fantasy floral tree with the theme of Alice in Wonderland. The theme was chosen by the RHS panel to celebrate the 150th anniversary of the story of Alice in Wonderland.

So, I hope you’ve enjoyed this round-up of florists involved in this year’s RHS Chelsea Flower Show, Chelsea in Bloom and Chelsea Fringe.

A very warm welcome! My name is Rona Wheeldon and I’ve made it my mission to inspire and support the floristry industry. I’m passionate about this incredible sector and everyone involved, rooting for florists, flower growers and flower wholesalers.
END_OF_DOCUMENT_TOKEN_TO_BE_REPLACED