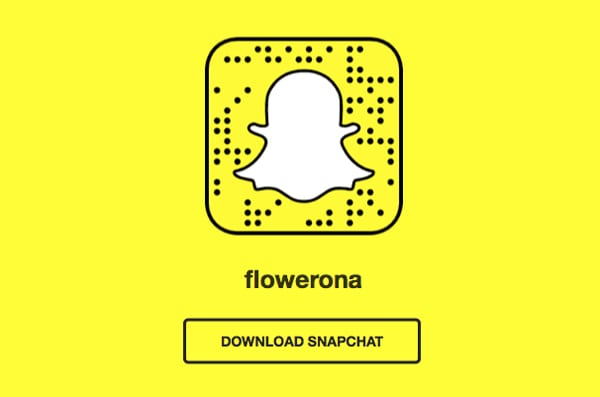 I have a new social media crush…Snapchat. Now, you might be thinking, isn’t that the app which young people use to post photos and videos, which immediately disappear?

Well, Yes and No. Yes, ‘snaps’ do disappear. But you can create something called ‘My Story’, a collection of photos and up to 10 second video clips, with each post lasting 24 hours. And No. It’s not only young people who are using it now. Over the last few months, I’ve noticed that some big names in the blogging world, as well as celebrities, are joining Snapchat.

I set up an account last year but hadn’t used it…that is until I presented Social Media at the recent Chapel Designers Conference in London. I told the delegates that I felt that Snapchat was increasingly becoming recognised as the next ‘BIG’ thing on the social media front. And I then saw how Holly Chapple started to use the app, sharing the conference on Snapchat (it’s perfect for live events). I could see the potential for florists to use it as another way to market their businesses, especially to a younger audience.

So, now, I’ll be honest…I’m a little addicted. And what do I love about it? Well, there are several things and here are a few of them:

POSTS DON’T HAVE TO BE BEAUTIFUL
Your photos and videos will disappear in 24 hours. So there’s no pressure at all to beautify your posts.

SHARE ‘BEHIND THE SCENES’
It’s so interesting to have a little peek into other people’s worlds.

If you’re a florist and you’re on Snapchat, it would be lovely if you’d like to comment below and share your Snapchat username. You’ll find me there as Flowerona.

P.S. If you’re not sure where to start…ask your son, daughter, nephew or niece. It’s highly likely that they’re already a whizz on it! (If you decide that it’s not for you at the moment though, at least set up an account to secure your company name.)

A very warm welcome! My name is Rona Wheeldon and I’ve made it my mission to inspire and support the floristry industry. I’m passionate about this incredible sector and everyone involved, rooting for florists, flower growers and flower wholesalers.
END_OF_DOCUMENT_TOKEN_TO_BE_REPLACED