Did you know that we process images 60,000 times faster than text?! And it’s well known that on Twitter, tweets with photos have higher rates of engagement, more retweets and more clicks.

That’s why I thought you may like to know about an easy way of making the most of your Instagram photos, when they appear on Twitter.

IFTTT ( If This Then That)

IFTTT is a web-based service which allows you to connect apps with ‘recipes’. By choosing one of its recipes, your Instagram photo will actually appear in your tweet, rather than just a link. Here’s how: 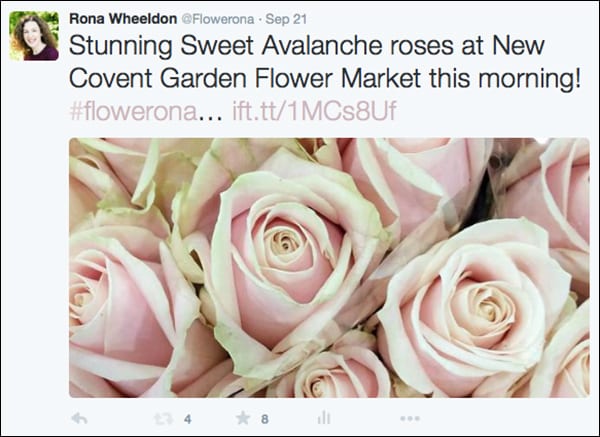 Under my photo, you can see that my tweet’s been retweeted 4 times and favourited 8 times, showing that by sharing a photo rather than a link, you’re more likely to get more engagement with your Twitter followers.

A couple of things to bear in mind…

I love this IFTTT recipe…it save so much time! And as well as improving the look of my Twitter feed, I’m sure it’s also gone some way to help me grow my Instagram followers.

P.S. Our Social Media for Florists workshop on October 20th is starting to fill up, with 75% of the places already booked.

A very warm welcome! My name is Rona Wheeldon and I’ve made it my mission to inspire and support the floristry industry. I’m passionate about this incredible sector and everyone involved, rooting for florists, flower growers and flower wholesalers.
END_OF_DOCUMENT_TOKEN_TO_BE_REPLACED

The @gardenmuseum in London has announced that the

The @gardenmuseum in London has announced that the