Flowerona Tips: Tweeting on behalf of a company? Here’s how to personalise it… 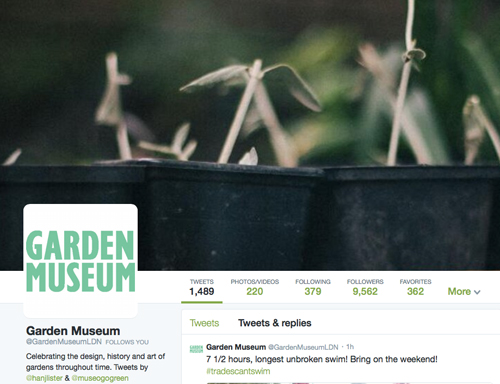 Behind every Twitter account, there’s a real person, just like you and me! And this Flowerona Tips blog post was prompted by a conversation I had with a company earlier in the week. Three people were responsible for their Twitter account. As personal service and building relationships with their clients was very important to them, I recommended that they let their followers know who was actually behind the account by adding the names of each person to the Twitter Bio.

In Settings/Profile/Bio, simply enter the names of who’s tweeting on behalf of your company, by including the text ‘Tweets by…’  The Garden Museum above is a great example. They’ve included the Twitter usernames of the people behind the account. But you could also use your first name or initials. And you could even put the your initials at the end of each tweet.

Whether it’s just one person or several people looking after a Twitter account, why not personalise it and make it more human by adding people’s names…

A very warm welcome! My name is Rona Wheeldon and I’ve made it my mission to inspire and support the floristry industry. I’m passionate about this incredible sector and everyone involved, rooting for florists, flower growers and flower wholesalers.
END_OF_DOCUMENT_TOKEN_TO_BE_REPLACED