In pursuit of all things floral, last week I visited Top Drawer, a trade show in London for retailers.

And this is where I found Lou Mills’ cheerful quirky greeting cards.  I was very taken by her designs and so I decided to find out about the lady behind them.

Before I tell you more though, here are some examples of her cards featuring flowers. 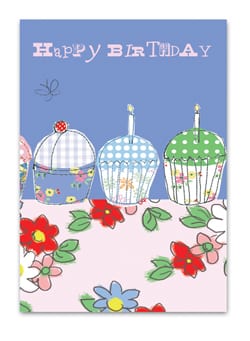 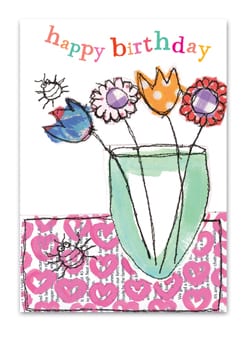 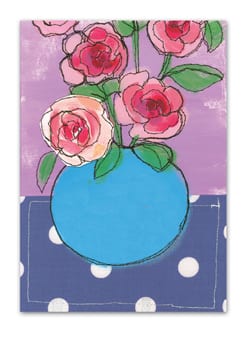 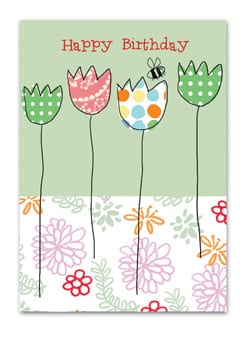 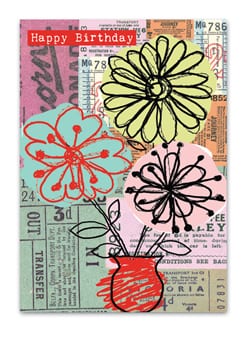 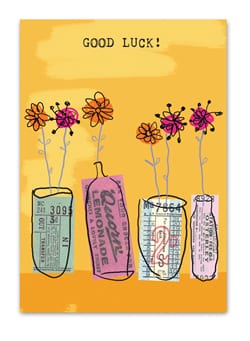 This is Lou’s story so far…

One Christmas, as she was a little strapped for cash, she decided to make her own Christmas cards (designs which she still sells – her Jingle Bells range).

Using acrylic paint, she brushed on to pieces of paper and roughly tore out different shapes. Then she used her old Bernina sewing machine to embroider around the shapes to secure them…all this taking place on her large wooden kitchen table.

Friends and family were very impressed and suggested that she started making them for a living.

However, it wasn’t until several years later in 2008 that she was able to focus on her cards, when she went part-time with her job as a Picture Editor on a magazine.

January 2010 was when she first started trading at Top Drawer and she hasn’t looked back since.  She loves the flexibility of being a card designer, especially as she has a new baby called Maisy.

Having graduated in Textile Design some years ago, pattern and colour is really important to Lou.  Inspiration comes from everyday objects, photos in magazines, flowers in her garden and things which trigger off a design form.

She finds trade shows very friendly affairs where she gets to meet lots of interesting people, which she loves.  And she still gets such a buzz from seeing her cards in UK shops!!

Many thanks to Lou for her interview and the images of her beautiful cards.  If you’d like to see more of her designs, please click here to view her website.

A very warm welcome! My name is Rona Wheeldon and I’ve made it my mission to inspire and support the floristry industry. I’m passionate about this incredible sector and everyone involved, rooting for florists, flower growers and flower wholesalers.
END_OF_DOCUMENT_TOKEN_TO_BE_REPLACED