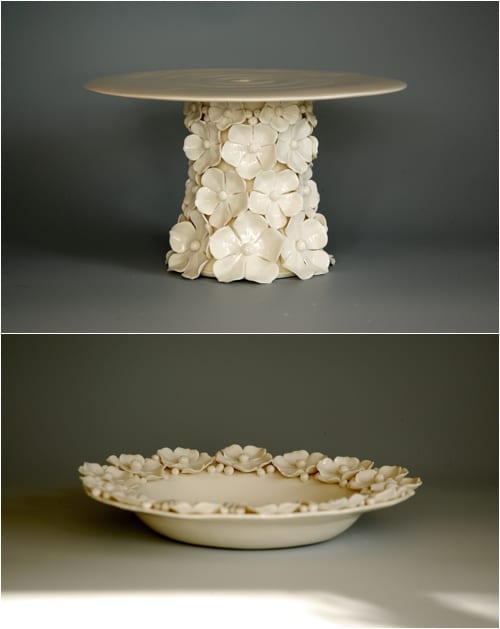 For a long time I’ve been a fan of potter Emma Clegg‘s work, so I’m delighted to be featuring an interview with her today.

Although I grew up in and around my dad’s pottery factories in Stoke, my business only started about ten years ago from selling pieces that I was making at an evening class run by Hilary La Force.

As it became more successful, I set up a workshop in an outbuilding at home, which is the old village blacksmith’s forge (our cottage was built by him in 1850), and I’m still there.

It’s pretty run down, and is in need of renovation, but it’s a wonderful space. I installed a wood burner a couple of years ago, and with Radio 4 on it’s my favourite part of the house!

It’s in a tiny village called Stretton on Fosse, which is near to Chipping Campden in the North Cotswolds. 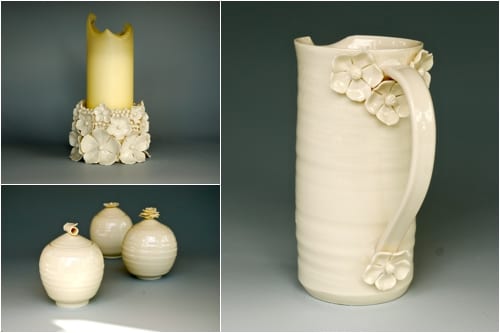 Could you tell us about your range of floral-inspired pottery?

My range of ceramics is made of high-fired porcelain, is wheel thrown and then decorated with three dimensional porcelain flowers.

Historically it’s always been plain white, but I am currently experimenting with some coloured glazes.

I was part of Fortnum & Mason‘s ‘Hand Made’ exhibition in 2010, and they asked me to make a tea service, which pushed my range into tableware as well as decorative pieces. 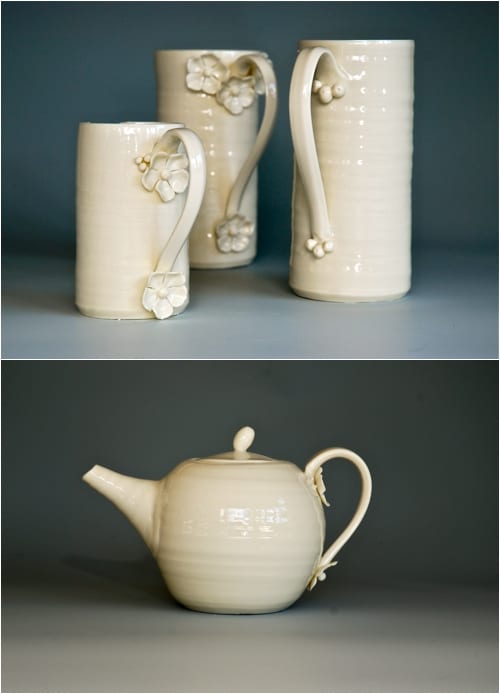 Could you tell us where you get inspiration your designs?

The inspiration for my work initially came from a very old Edward Raby piece, made for the Bristol Pottery, which is at my parents’ home.

It’s a tiny wreath of peonies, which are no more than 1cm across. The accuracy and precision that he achieved in clay is just breath-taking.

It was buried under a cross in Bristol for over one hundred years, and when the cross had to be removed, the piece was, miraculously, still perfectly intact.

I’m in awe of the skill and patience that he must have had. Such skill…

My work now is really an echo of the countryside that surrounds me.  I walk my dog daily along the local hedgerows, which are a constant source of inspiration.

Could you tell us about the egg you made for the Faberge ‘Big Egg Hunt‘ in London this year?

My egg was called ‘Vanitas Vitrified’, and was covered in porcelain flowers.

I was extremely lucky as it was sponsored by Sotheby’s and placed outside their Mayfair headquarters.

It was auctioned later by them, for £17,000, raising money for ‘The Elephant Family’ and ‘Action for Children’. 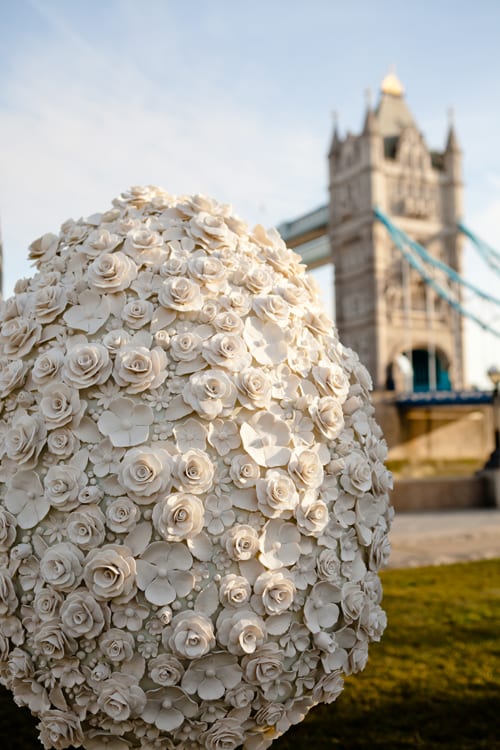 Later this year I will be exhibiting at Ceramics in the City at the Geffrye Museum, and at Made London. I will hopefully be introducing some coloured glazes to the range.

My favourite flower has to be the dog rose. It grows in such abundance, sometimes in the harshest of weather conditions and with no assistance.

A very warm welcome! My name is Rona Wheeldon and I’ve made it my mission to inspire and support the floristry industry. I’m passionate about this incredible sector and everyone involved, rooting for florists, flower growers and flower wholesalers.
END_OF_DOCUMENT_TOKEN_TO_BE_REPLACED