Kate’s bridal bouquet…what did you think? 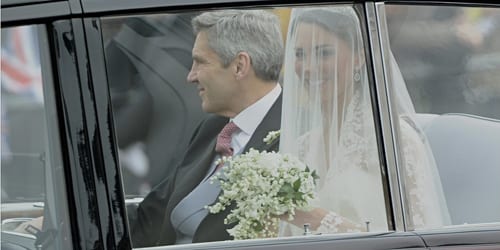 What a wonderful day!  The weather held out and the crowds lined the streets of London, waving Union Jack flags.  I was glued to the television and I wasn’t disappointed by how amazingly beautiful Kate looked!

But after all these months of waiting, was her bridal bouquet what you were expecting?

Well, it certainly came as a surprise to me…in particular its size (and lots of people on Twitter seemed to be of the same opinion).  However, bearing in mind how intricate the lace was on her dress, her bouquet had to complement it, not fight with it.

So that’s why I think Shane Connolly, her florist, decided on such an understated design. The style also very much reminded me of Camilla’s bridal bouquet, also made by Shane. 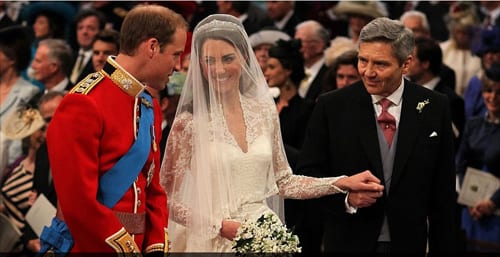 Kate’s bouquet was a shield-shaped wired bouquet of lily of the valley, sweet william and hyacinth with myrtle and ivy.  The meaning of the flowers was very important to Kate, so the design included flowers of significance for the Royal Family and the Middleton family.

The flower meanings in the bouquet are:

As tradition dictates, the bouquet contained stems from a myrtle planted at Osborne House, Isle of Wight, by Queen Victoria in 1845, and a sprig from a plant grown from the myrtle used in The Queen’s wedding bouquet of 1947. 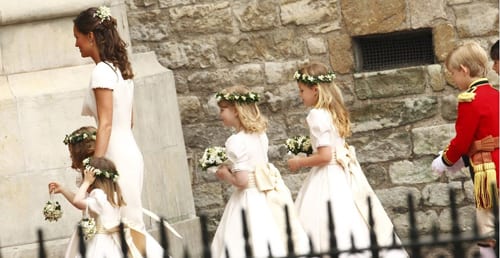 The bridesmaids’ flowers were also designed and made by Shane.  The ivy and lily of the valley hair wreaths worn by the younger bridesmaids were influenced by the bride’s mother’s own headdress at her wedding in 1981.

And the bouquets held by the bridesmaids replicated the flowers used in Kate’s bouquet, incorporating lily of the valley, sweet william and hyacinth.

Flowers also featured in Kate’s dress.  The lace, custom made for the dress, incorporated four emblems of the United Kingdom; the rose, thistle, daffodil and shamrock. Embellishing flowers were cut from English and French Chantilly lace, and the layers of the dress were also designed to resemble an opening flower.

However, lily of the valley (Convallaria majalis) is generally only available in the UK in April and May.  Sweet William (Dianthus barbatus) is available generally from April to June.  Hyacinths (Hyacinthus orientalis) are more readily available – normally from November to May.  So overall Kate really did choose seasonal flowers!

On a final note, what a touching tribute to her husband that her bouquet included sweet william…

What did you think of Kate, the Duchess of Cambridge’s bouquet?

A very warm welcome! My name is Rona Wheeldon and I’ve made it my mission to inspire and support the floristry industry. I’m passionate about this incredible sector and everyone involved, rooting for florists, flower growers and flower wholesalers.
END_OF_DOCUMENT_TOKEN_TO_BE_REPLACED

Q & A Video | An opportunity to ask me anything...