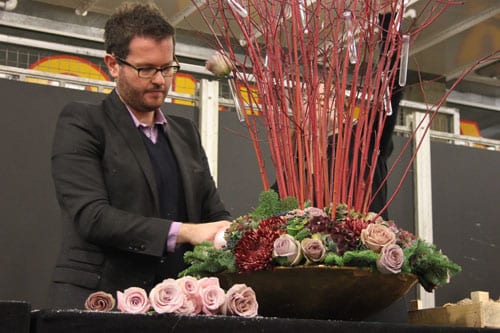 You may remember from my post last week that I recently went to the ‘Celebrating the Rose’ event at New Covent Garden Flower Market in London.

Well, today’s post is the first of two about the very talented florists who demonstrated their designs there.

First off is floral designer, Neill Strain.  Originally from Ireland, Neill has been in London for nine years and has a shop in Belgravia.  His client base is mainly private clients and he creates their arrangements ‘in situ’ in their homes.

He had his first Saturday job in a florist shop when he was fourteen and left school when he was sixteen.  He then went to a horticultural college in Ireland before undertaking some industry-based training in London.  This was followed by further studying at the Boerma Instituut in Holland.

He visits New Covent Garden Flower Market three to four times a week and finds it very inspirational, seeing up-close what’s in season and which new varieties of flowers are available.

For the ‘Celebrating the Rose’ event, Neill decided to concentrate on a Christmassy theme for his rose-inspired designs…and they were all absolutely beautiful!  I loved the combinations of colours and textures which he used.

With the design above and below, he wanted an autumnal, antiquey/vintage feel which he said is very popular at the moment.  Red stemmed cornus was used to create height with rose-filled tubes and at the base of the design were burgundy chrysanthemum blooms, roses, viburnum berries, antique hydrangea and pale pink baubles. 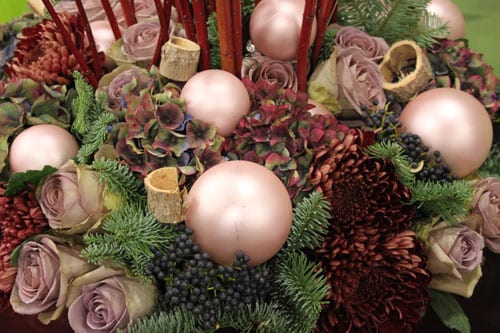 With the design below, Neill started off with black sugar canes bound with black aluminium wire in a tall cylindrical vase.  He then threaded through a Dutch rose called ‘Myra’ and added black rushes…such a simple, yet striking arrangement. 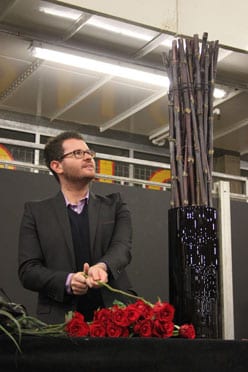 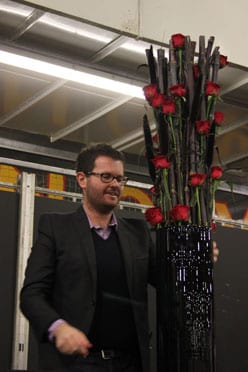 Next, Neill created a design with a pink and green Christmas theme.  He said that you don’t always have to stick with red and gold, and that this arrangement would be perfect as a table centre for a dinner party.

Then, to add a touch of sparkle to the design, he draped over a garland of argentium leaves which had been rolled and secured with ice blue aluminium wire. 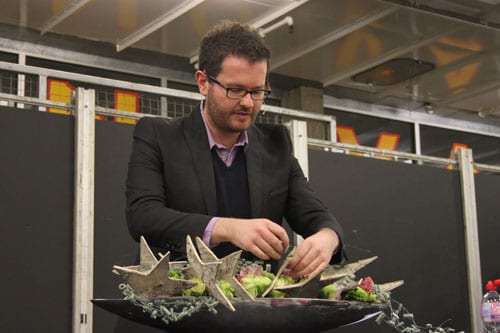 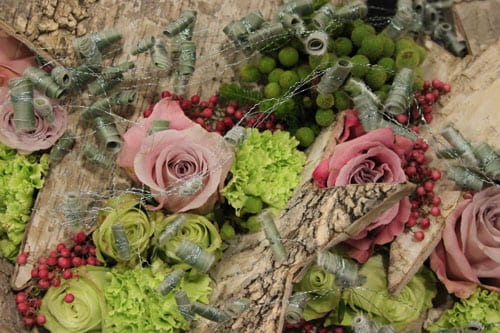 Below is a close-up of a star-shaped oasis design which could be used on a coffee or dining table.  Neill used a pink-tinged cream rose called ‘Sweetness’ and the beautifully scented cream garden rose, ‘O’Hara’, together with nigellas, berried ivy, pine and apples.  He then added tall candles and a little snow to the arrangement! 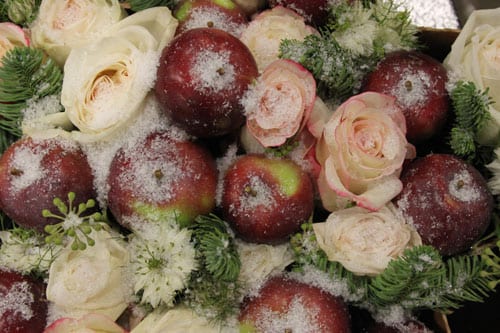 I loved the very simple design below which he created using a shallow glass bowl filled with water, broken Christmas baubles, spray ‘Red Sensation’ roses, beige carnations fringed with red to pick up the colour of the roses and ‘Coca Cola’ cymbidium orchids.

Neill said that the design would be suitable for the home of a young professional couple, without children – simply because of the sharp edges of the baubles… 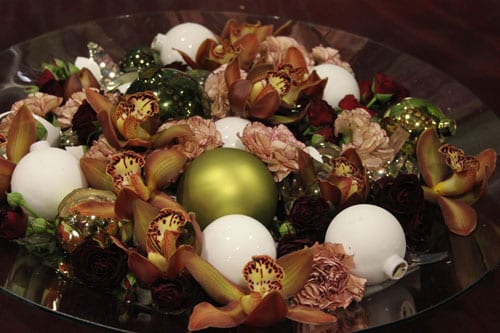 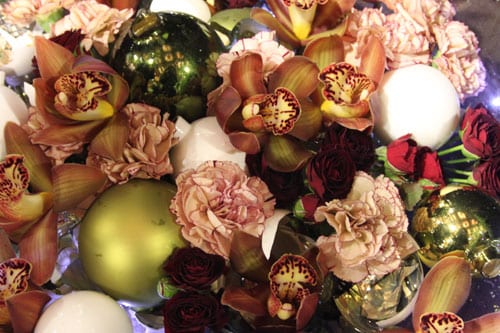 The image on the left below is a close-up of a floral oasis heart design consisting of lilac ‘Amnesia’ roses and ‘Ocean Song’ roses, ‘Rasta’ orange roses, gilded rosehips, golden coral fern and moss.

The heart could be used as a door wreath or as a table decoration with candles.  Neill told us that he now actually offers a service to lock people’s wreaths to their doors as they’ve been known to disappear in the Belgravia area! 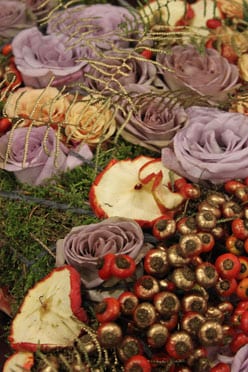 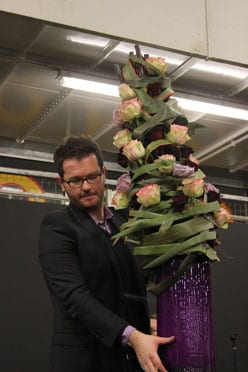 The image on the right above is Neill’s modern take on a Christmas tree.  He stapled phormium tenax leaves around black sugar canes.  Then, he wove in the pale pink Ecuadorian rose, ‘Esperance’, to pick up the pink tips of the phormium.  ‘Black Baccara’ roses from Ecuador and ‘Ocean Song’ roses were also added, but Neill said that instead of the roses you could decorate the tree with carnations or chrysanthemum blooms.

I was wowed by Neill’s designs!  If you’d like to see more of his work, do take a look at his website, where his company is described as floral couture…and I can definitely understand why.  He’s also on Twitter and Facebook. 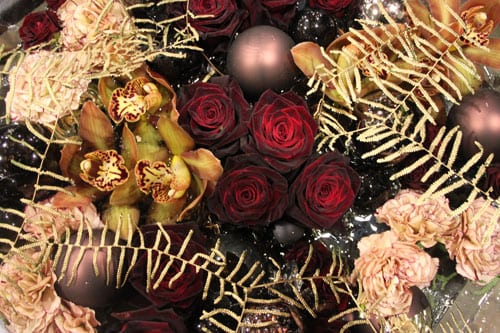 Tune in tomorrow for stunning floral arrangements by the second designer, Claire Cowling.

A very warm welcome! My name is Rona Wheeldon and I’ve made it my mission to inspire and support the floristry industry. I’m passionate about this incredible sector and everyone involved, rooting for florists, flower growers and flower wholesalers.
END_OF_DOCUMENT_TOKEN_TO_BE_REPLACED