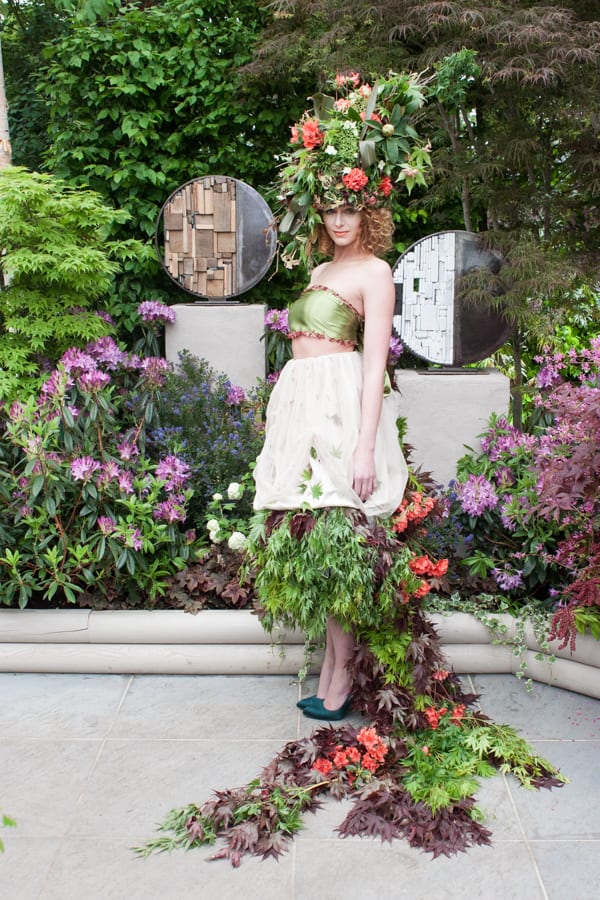 The very talented Jessica and Chikae from Okishima & Simmonds created this breath-taking dress and headdress for Hillier Nurseries, who won their 70th consecutive Gold medal for their exhibit at this year’s RHS Chelsea Flower Show.

The theme for the exhibit was ‘Crossing Continents’ and it illustrated how plants from across the world have become classics in British gardens. The dress and headdress celebrated this theme and today I’m delighted to feature images of the designs modelled by Katherine Warwick-Adkins, plus a behind the scenes look at them being made. 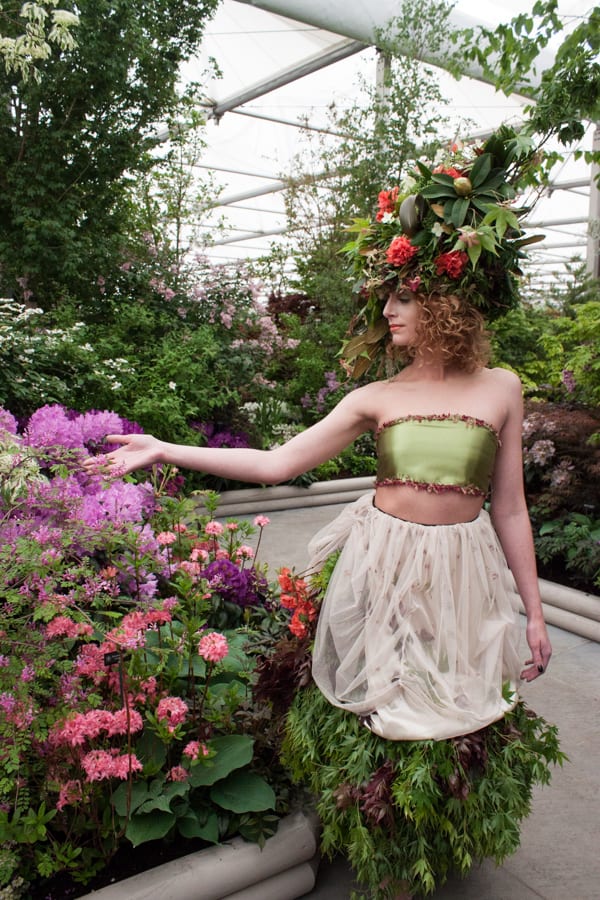 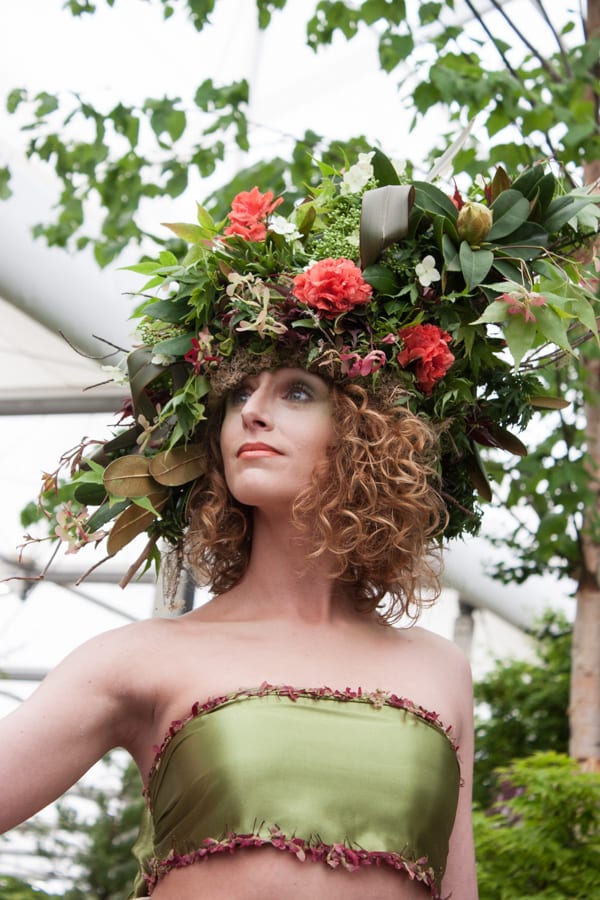 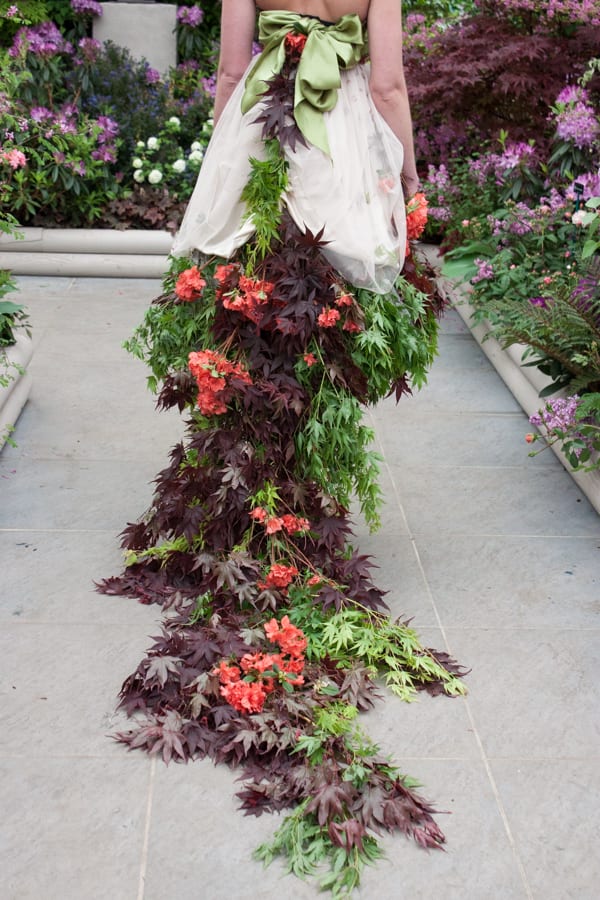 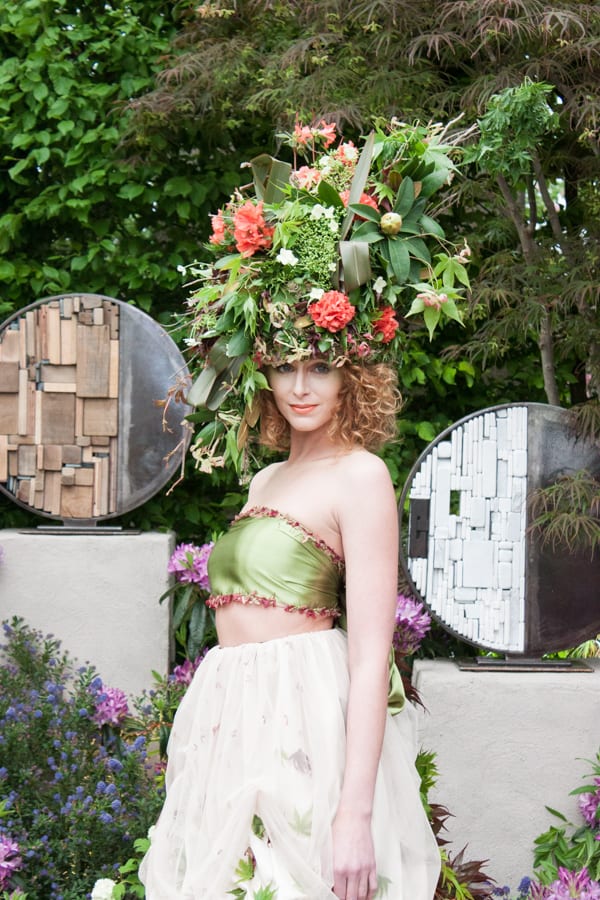 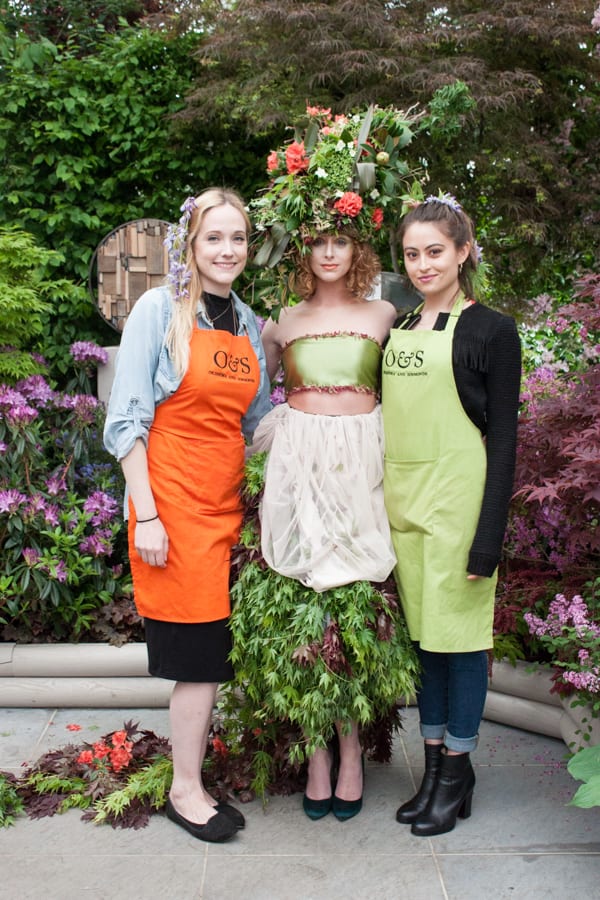 Huge congratulations to Jessica (left) and Chikae (right)! These amazing floral creations were featured last week in The Independent, The Telegraph, The Daily Mail and The Times, plus on news websites all over the world including Malaysia, India, Cairo, China, Lebanon and Singapore. So, the designs really did ‘cross continents’!

I had the pleasure of spending time with Jessica and Chikae on the Saturday prior to the show, when Jessica talked me through the inspiration for the designs.

To create the dress and headdress showcasing foliage and flowering foliage, Jessica compiled a moodboard on Pinterest full of inspirational images. She said: “For the dress, we chose an elegant design and took inspiration from Marie Antoinette, who wore dresses which had bustles.” Acer, with its natural flowing shape, formed the bustle and train. And they used it to create a petticoat of foliage underneath the skirt. Orange Azalea blooms were also added to the train.

The Making of the Dress

Prior to making the dress, Jessica made a prototype. She sewed pieces of acer, in shades of green and burgundy, onto a skirt using clear fishing wire. 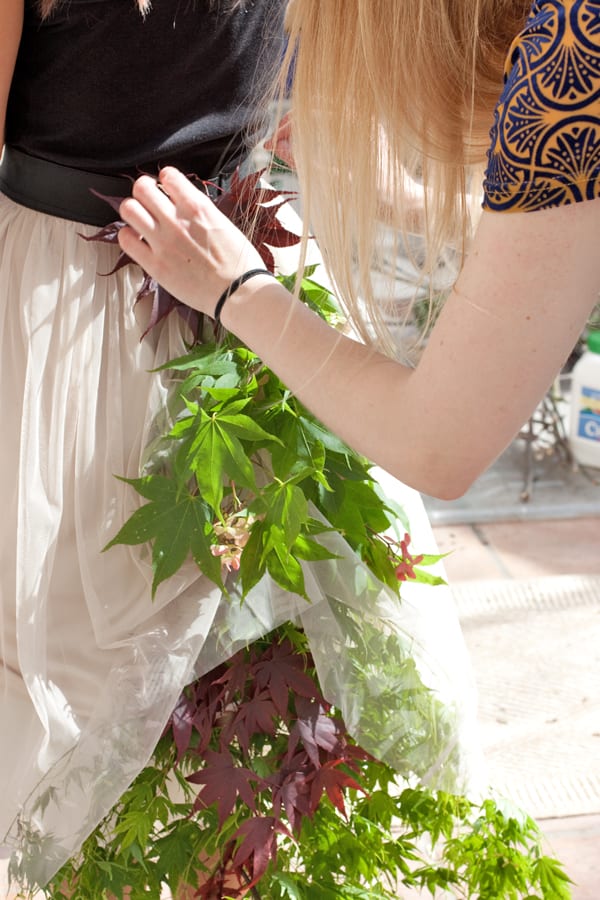 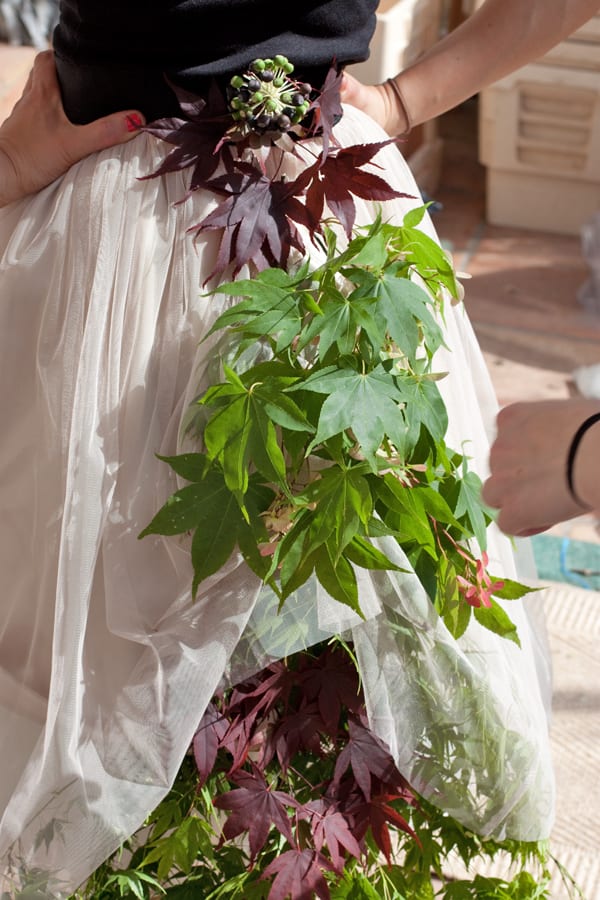 Pale green silk was used to create a bandeau, with a bow tied at the back. 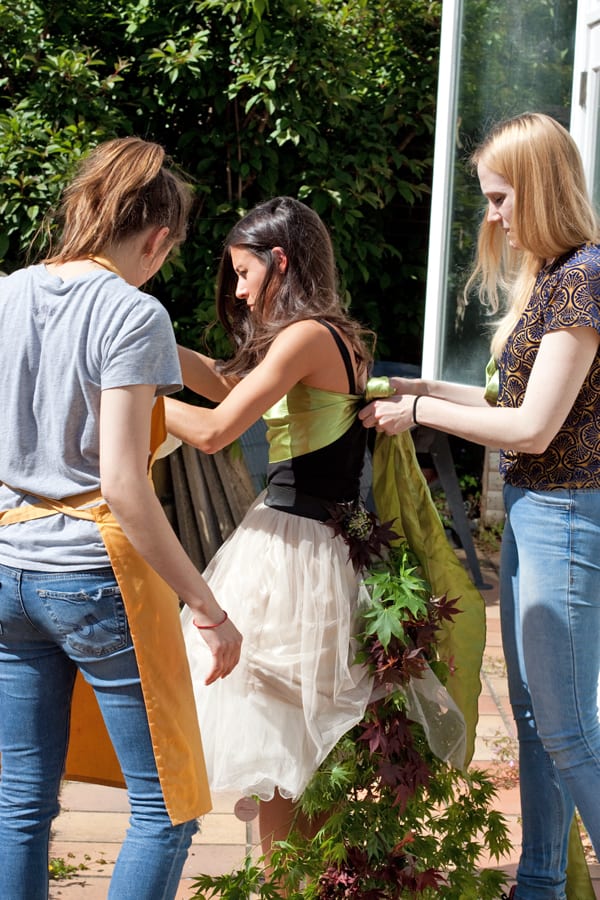 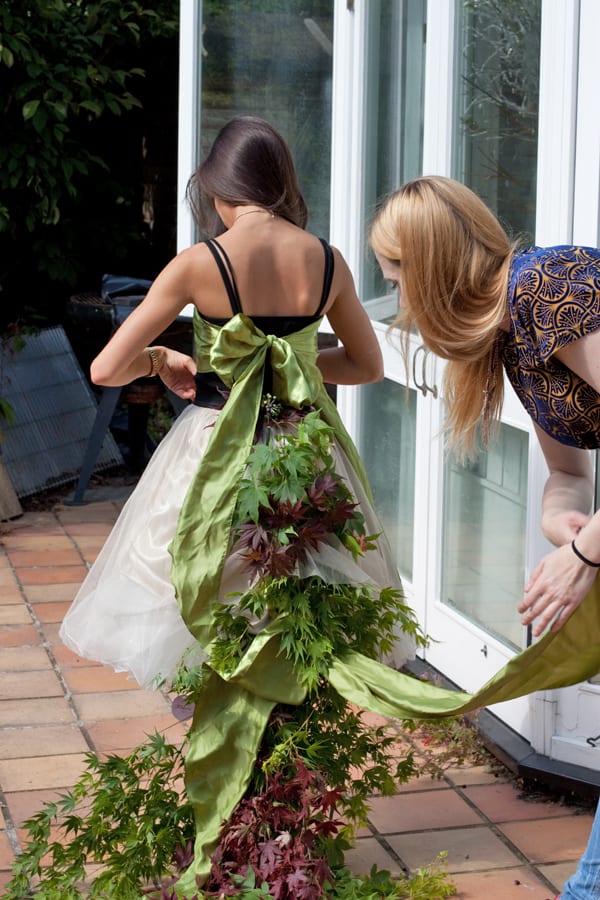 The Making of the Headdress

Wire was used to create a framework for the headdress. The design was influenced by how a St. Lucia crown is made. (St. Lucia crowns are made in Sweden for St. Lucy’s Day on December 13th.) Chicken wire was attached and then moss was added. 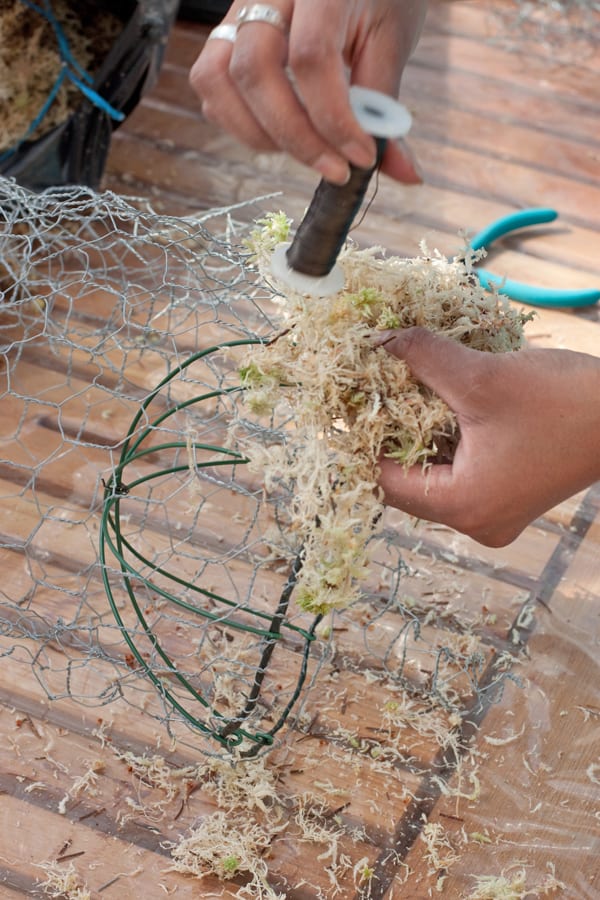 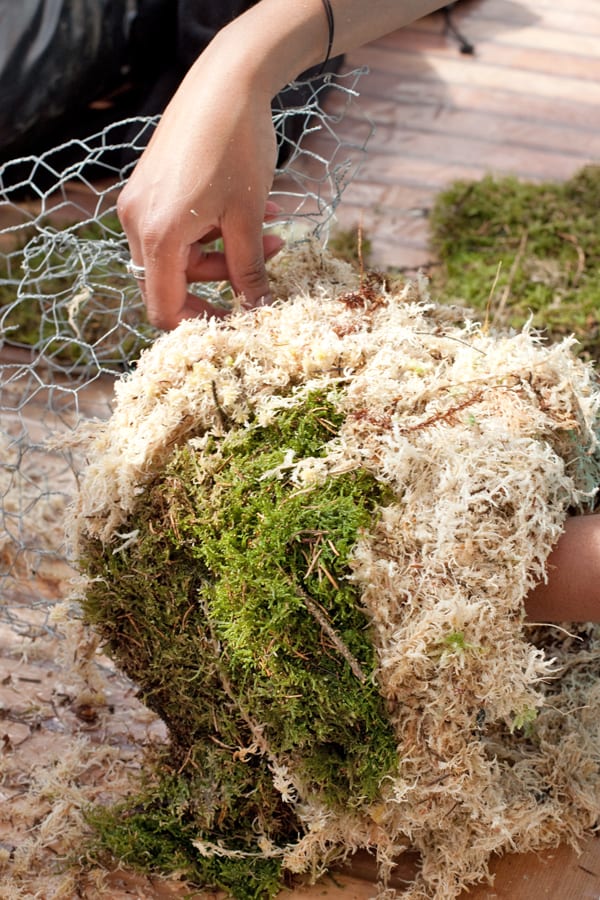 Different varieties of foliage were then attached. The designs certainly caused a real stir at the show!

A very warm welcome! My name is Rona Wheeldon and I’ve made it my mission to inspire and support the floristry industry. I’m passionate about this incredible sector and everyone involved, rooting for florists, flower growers and flower wholesalers.
END_OF_DOCUMENT_TOKEN_TO_BE_REPLACED

Floral foam will be banned from 2021 confirms @the

So very, very happy to see Anemones growing in our

Branding on Instagram is the focus of this week’

“Always dream and shoot higher than you know you

Floral foam will be banned from 2021 confirms @the

So very, very happy to see Anemones growing in our

Branding on Instagram is the focus of this week’

“Always dream and shoot higher than you know you

The incredible response to yesterday’s IGTV and

An A-Z of Instagram Advice for Florists starts on