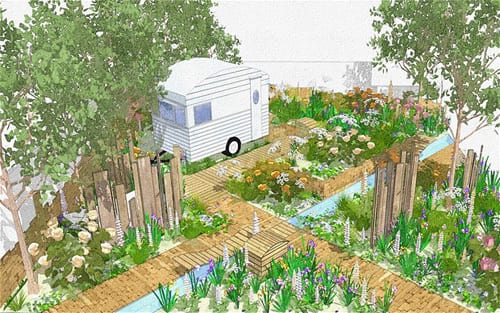 I hope you enjoyed reading Part 1 last month when I started following garden designer Jo Thompson’s journey to creating her show garden for the RHS Chelsea Flower Show.  The garden is for The Caravan Club and is called ‘A Celebration of Caravanning’.

With her garden, Jo wants to evoke a sense of what it means to be on holiday in Britain…and with the weather we’ve been having lately, wouldn’t it be wonderful to go caravanning over the Easter break?

This month in Part 2, we’ll be finding out more about the trees and plants that Jo will be using. Plus we’ll hear about the beautiful hammock which is being made for her garden. 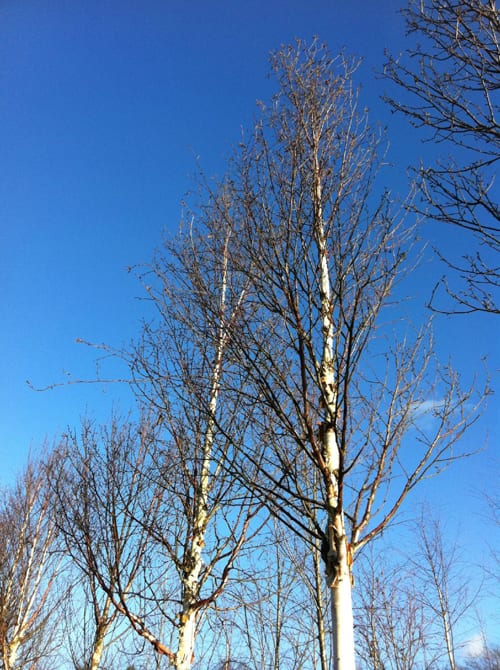 They’re a type of birch and have a creamy white bark. In the past, Jo’s designed gardens with multi-stemmed birches, so she said she’s a little nervous about using these upright ones as they’re very erect compared to the multi-stemmed variety.

But I’m sure they’ll look wonderful placed around Doris, the vintage caravan. It’ll be very interesting to hear how they’re going to be transported to Chelsea though as they look mighty tall in the photo!

Here are some of the plants growing in a poly tunnel at Roger Platts. 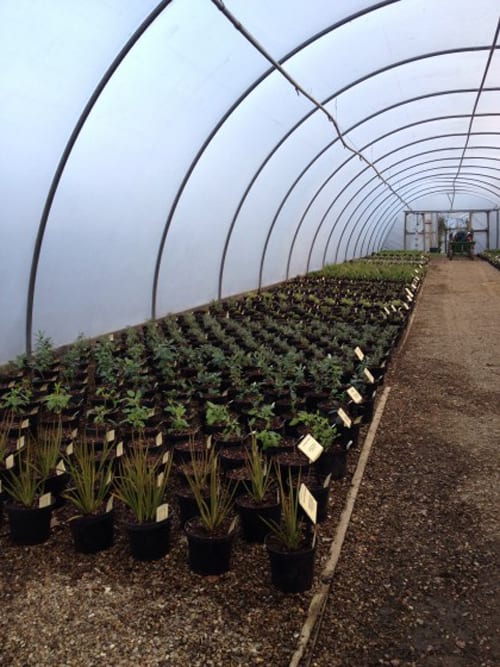 I’m so looking forward to seeing the flowers, as they include one of my favourite blooms…peonies, whose Latin name is Paeonia.

Jo will be using Paeonia ‘Bowl of Cream’ which is a creamy-white colour, pictured on the left below and pale pink Paeonia ‘Mr. Ed’ which is on the right. 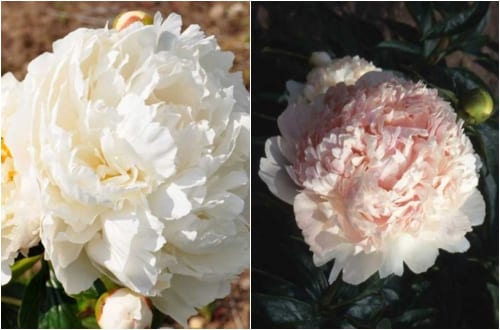 Her trademark of blousy planting will be very much in evidence with Anthriscus sylvestris ‘Ravenswing’ pictured below, which is also known as cow parsley. 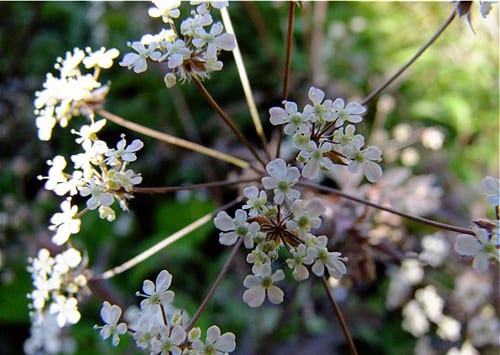 The cow parsley, together with Pimpinella majorrosea and Chaerophyllum hirsutum pictured below, will form a veil in front of the peonies and pink roses. 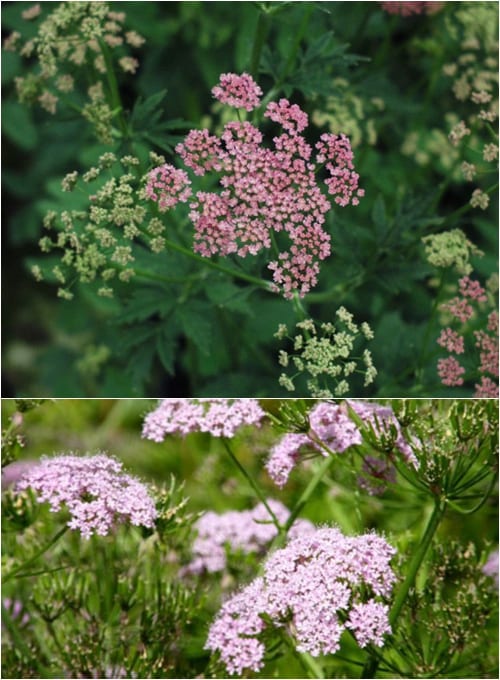 Wispy Linum perenne plus Lychnis flos-cuculi ‘White Robin’ and Silene fimbriata will soften and blur the edges of the garden.

Erodium chrysanthemum and Geranium himalayense ‘Gravetye’ will also be included in the planting. 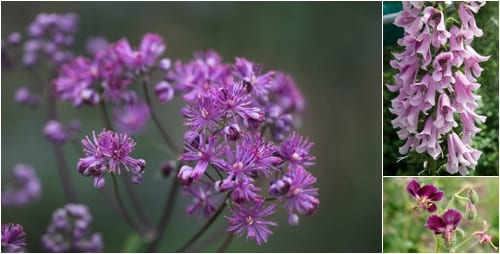 Jo said: “I don’t do tall at the back, medium and small at the front.” And it’ll be intriguing to see how she decides to arrange all the plants once she starts on site on May 4th.

There isn’t room in the garden for a deckchair, so Jo’s decided to have a hammock and the lady responsible for creating it is textile designer, Carmel Meade.

Carmel explained to me that the brief was romantic and vintage.  The inspiration for the design came from a patchwork textile piece she’d previously made…which is below. 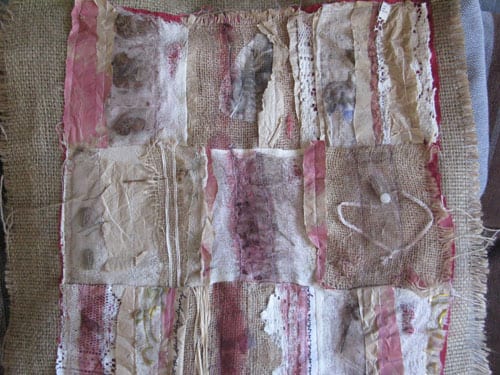 She said: “At the moment the hammock is nearly halfway there. I’m making 50 patches and I’m on the last 5 of the 1st 25.

The colour palette for the design comes from the flowers in the garden Jo’s designing – cream and pink, with hints of green and purple.

The fabric has come mainly from eBay. Also scraps I had in my studio and some calico I printed with acrylic paint. The hammock will take roughly 6 weeks to make and will measure 200cm x 80 cm, which is slightly larger than a single bed quilt.

I mainly work with fabric and stitch. As a fine artist I’m not an expert quilter but use all traditional methods of craft and stitch in my work.

My grandmother taught me to sew and as an artist I feel that stitch is part of a domestic language passed down through generations of women.

I’m inspired by nature and when Jo came to me with her idea for the hammock I knew immediately I wanted to combine the romance of a ‘staycation’ with the beautiful colours and feel of her garden.

I’m trying to incorporate elements of nature, the feel of the 50s and the romance of caravanning in the hammock.

Each patch is individually designed and no two patches are the same. The union jack patches refer to the Diamond Jubilee and also to the British history of caravan holidays. I will also be covering four picnic stools in patches.” 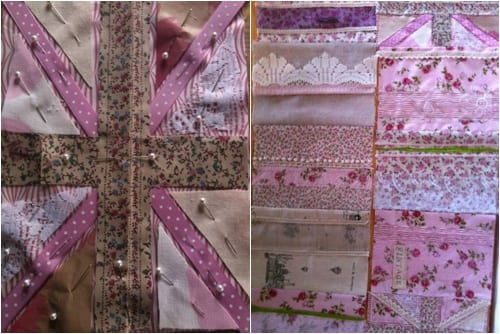 Having seen these pictures of the hammock being made, it really is the kind of relaxing seating I’d love to have in our garden! Can’t wait to see it in situ…

So as to what’s also been happening this month…

Well, Jo’s told me that the boundaries are now going to be hornbeam hedges instead of sandstone, due to budget.

Apparently, as long as you don’t mention things in the brief, you can change them…so deciding on a change of boundary material is completely within the Chelsea rules.

Myrtle is now also going to be included in the garden…and we’ll take a further look at foliage next month.

On the staycation theme, this month the government launched a £5 million advertising campaign, featuring Stephen Fry and Harry Potter star Rupert Grint, among others, to encourage people to stay in Britain for their holidays.

So Jo and The Caravan Club’s garden design is very on-trend with a staycation theme.

Jo’s already started to have vivid Chelsea dreams…or should I say nightmares?! And she’s asked herself, “Why do we do Chelsea?” but admits it’s like ‘a strange drug.’

This is her third time at the show and admittedly, this is the first time she’s designed one of the large show gardens, but I’m sure it’ll be absolutely amazing…and will have universal appeal.

Jo hopes her garden will inspire people to take bits of it and put them in their own garden. And from the plans, I’ve seen, it wouldn’t surprise me if we start seeing caravans appearing at the bottom of people’s gardens this summer, decked with bunting…

Tune in next month for April’s developments…and in the meantime, on Twitter, you can follow Jo and Carmel.

A very warm welcome! My name is Rona Wheeldon and I’ve made it my mission to inspire and support the floristry industry. I’m passionate about this incredible sector and everyone involved, rooting for florists, flower growers and flower wholesalers.
END_OF_DOCUMENT_TOKEN_TO_BE_REPLACED