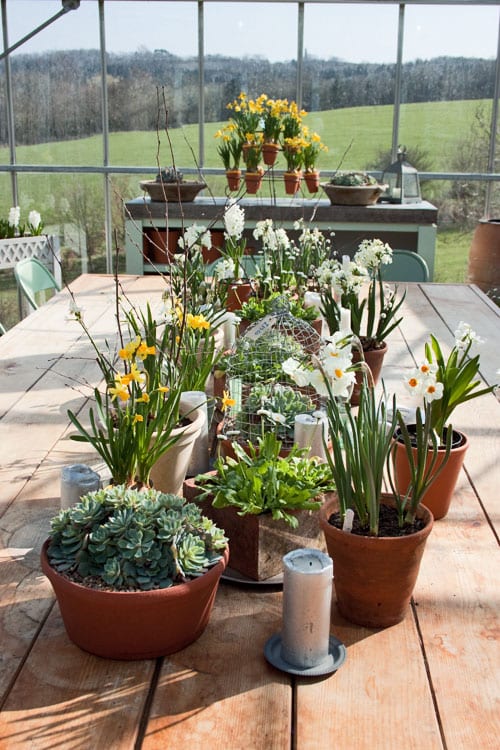 I hope you had a lovely weekend. We’re starting this week with a spring bulb potting demonstration by Sarah Raven at Perch Hill Farm.

For a long time, I’ve wanted to visit Sarah’s farm and the other Saturday, I was invited to attend an Open Day there which was arranged in conjunction with the Flower Council of Holland.

Using spring bulbs to brighten up your home was very much the theme of the day. In the morning, Sarah did two demonstrations and then in the afternoon, there was a hands-on workshop.

In each of the hour-long demonstrations, Sarah explained about the different types of spring bulbs available and how to pot them up. 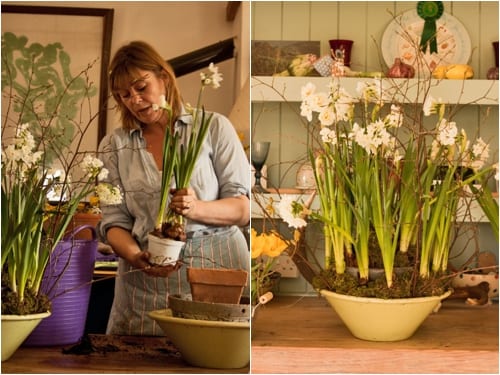 She started off by telling us all about one of my favourite spring bulbs, the narcissus.

First to flower are ‘Paper Whites‘, which she said generally bloom in early November. They are pure white and highly fragrant. And the bulbs only need to be planted four to six weeks before you would like them to bloom.

The second narcissus to come into flower is the ‘Avalanche‘, which is white with a yellow centre.

Then there is the ‘Cragford‘ narcissus which is orange-centred and needs to be planted eight to ten weeks before it will flower.

Next is the Narcissus ‘Cheerfulness‘ which has double white flowers, with cream and yellow centres.

And last, but no means least, is the golden yellow and very popular narcissus ‘Tete a Tete‘.

Using ‘Paper Whites’, Sarah showed us how to make the tiered ‘wedding cake’ design above, which would make a beautiful winter table centrepiece.

Once they’ve bloomed, all of the narcissi bulbs, apart from ‘Paper Whites’ which are for indoor flowering only, can be saved and planted outside the following autumn.

You should leave them to photosynthesise for as long as possible.  Take them out of their pots and put them somewhere light, but cool, until the middle of June.

Then cut the leaves, put them into an onion bag and hang them from your shed roof. In late September, you can plant them in your garden.

Sarah explained that all of the hyacinth bulbs she was using for the demo had been forced, which means that they had been made to feel that they’d been through winter and that now it’s spring.

She talked us through some of the varieties available including white ‘L’innocence‘, yellow ‘City of Harlem‘, blue ‘Peter Stuyvesant‘, pink ‘Woodstock‘ and reddish pink ‘Jan Bos‘.

Sarah showed us how to make a tablecentre using hyacinth bulbs.  She started off by covering a zinc pot with rosemary, which she attached using Florafix and string.

Then she placed the bulbs into the pot and added some pussy willow to soften the design.

She mentioned that some people find hyacinth bulbs allergenic, so it may be advisable to use gloves when handling them.

Using ‘Yellow Baby‘ tulips, she made the tablecentre on the left below.  She also told us about the different types of tulip bulbs available including the beautiful ‘Purple Dream‘, cream ‘Purissima‘ and yellow-centred bakeri ‘Lilac Wonder’. 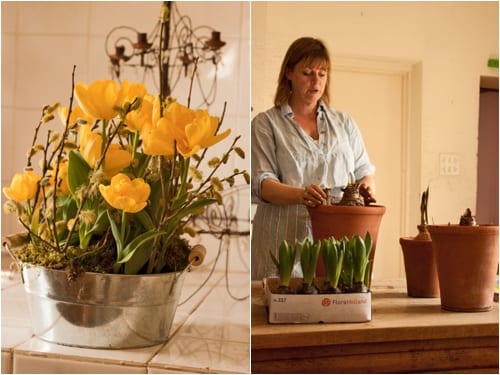 Sarah advised us that amaryllis naturally flower in mid-spring and the ones we see at Christmas have been forced.

She said to keep hold of any amaryllis bulbs that you have flowering in your home over the Christmas period.  They will flower and flower again.

They must have a dormant period though.  So after they’ve bloomed, stop watering them and cut off their leaves.

Re-plant them in March with three in a pot.  The key thing is that when planting them, a third of the bulb has to be above the compost, as she showed us in the image on the right.

‘Green Goddess‘ is white and is one of her favourites.  She also recommended reddish pink ‘Hercules‘ and white ‘Mont Blanc‘.

Sarah’s farm is situated in such an idyllic ‘get away from it all’ countryside setting in East Sussex. 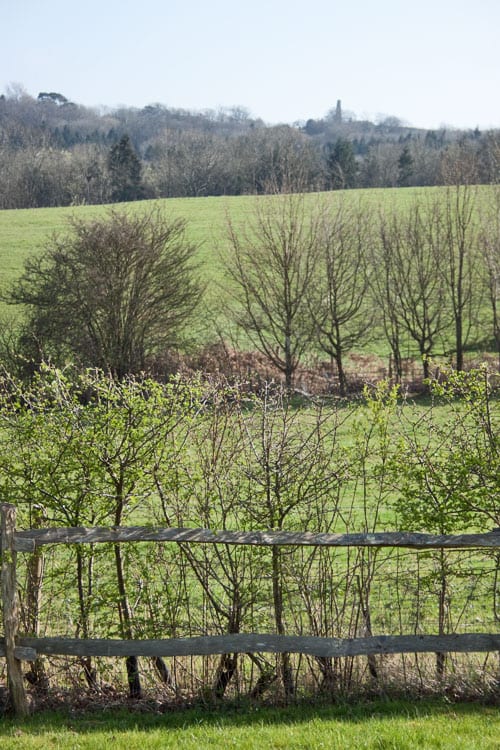 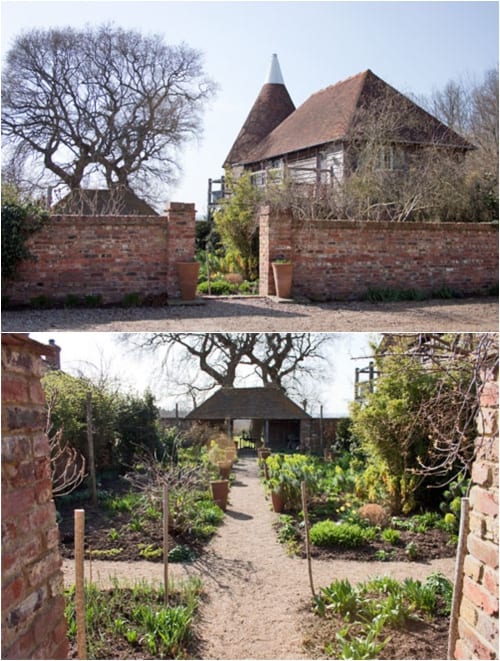 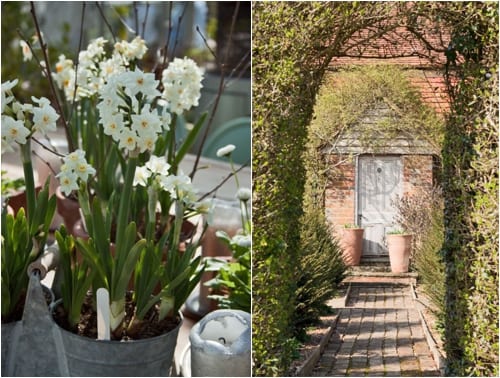 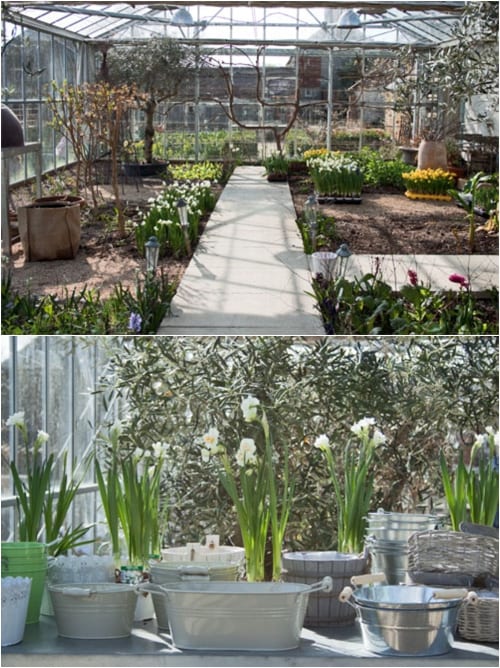 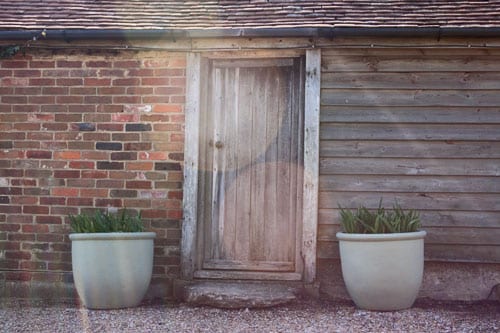 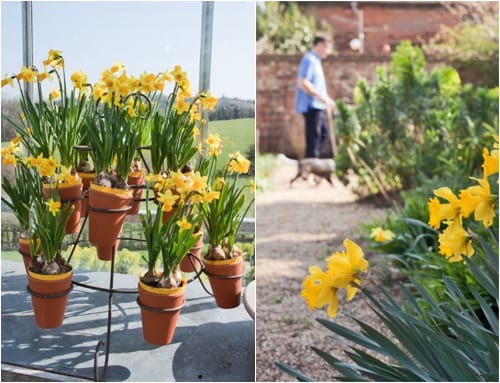 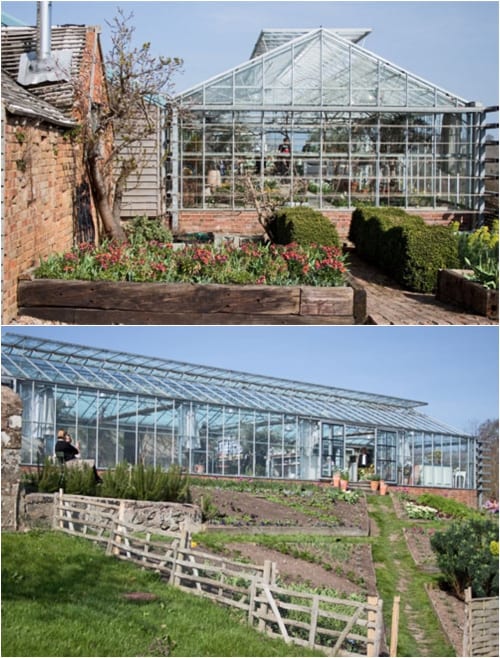 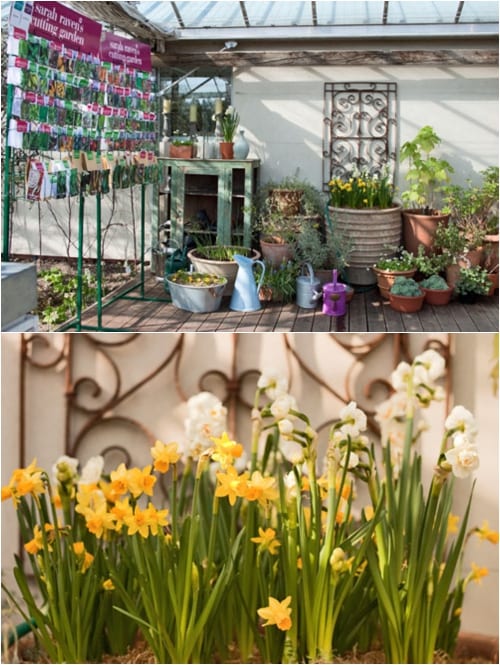 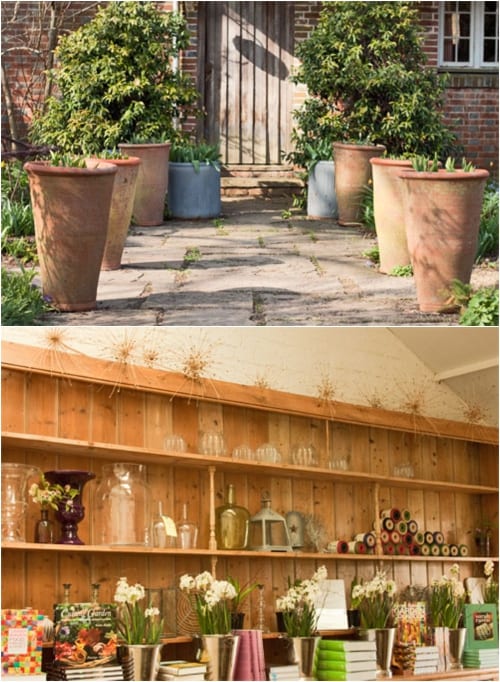 After lunch, there was a hands-on workshop led by Sarah and here’s everyone taking part below, potting up tulips, narcissi and hyacinths.

It was so much fun and we all really enjoyed filling our pots which we’d brought along with compost, choosing and placing our bulbs, and finally inserting birch twigs to give the flowers support.

My pot of ‘Red Princess‘ tulips is on the right below.  They’re now blooming on our kitchen table and certainly add a real splash of colour to the room. 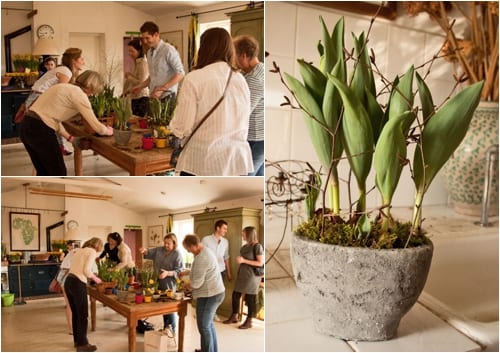 Whilst at the event, I also had the pleasure of interviewing Sarah.

I asked her how she became interested in gardening and she explained that both her parents were gardeners.

Her father in particular was a keen botanist. From an early age, she would spend time with him in the countryside searching for wild flowers and she learnt their Latin names.

At university, she took a history degree and later studied medicine.  Then when her children were young, she spent all her spare time gardening. She loves having flowers in the house, so starting growing them and her passion for gardening developed.

She’s been at Perch Hill Farm for almost eighteen years and has created different garden rooms full of annuals and biennials for picking for the house.

When I asked her how she would define what she does now, she said: “I would say that I’m a specialist in productive gardens.  I help people to grow produce ‘from plot to plate or vase’.”

Being a spring bulb focused day, I had to ask Sarah what her favourite spring bulb is…it’s tulip ‘Ballerina‘, with beautiful orange petals and a sweet scent.

And her favourite cut flower?  Well, she loves dahlias and also glamorous and dainty Iceland poppies.

In addition to holding Open Days throughout the year, Sarah also currently runs three floristry courses.  One for beginners, one for people who would like to grow and cut their own flowers, plus a course on how to create wedding and party flowers.

Her plans for the coming year include researching a new book about Vita Sackville West‘s garden writing.  Sarah is married to Vita’s grandson and they split their time between Sissinghurst Castle and Perch Hill Farm.

However in a year’s time, Sarah and her family will be leaving Sissinghurst, which is home to the inspirational gardens created by Vita, so she’s decided to write the book before she departs.

I would like to thank the Flower Council of Holland for putting on such a fabulous day and also Sarah and Anna from Peretti Communications for all their help.

I’m sure, like lots of other people at the Open Day, that I’ll be using spring bulbs much more often to add a lovely fragrance and colour indoors.

Why not pop along to your local garden centre over the Easter weekend to buy some bulbs to brighten up your home?  Potting them up is so simple and it might be something you’d like to do with your children during their school holidays…

A very warm welcome! My name is Rona Wheeldon and I’ve made it my mission to inspire and support the floristry industry. I’m passionate about this incredible sector and everyone involved, rooting for florists, flower growers and flower wholesalers.
END_OF_DOCUMENT_TOKEN_TO_BE_REPLACED

It's Tuesday, which means it's Podcast Day! And to

So very happy to see Alliums blooming in our garde