The story of the Daffodil… 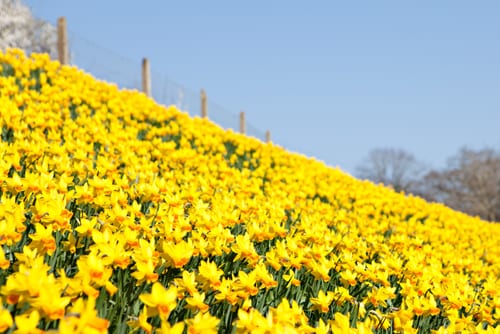 Last month, flower photographer Katie Spicer wrote a wonderful guest blog post about snowdrops. It was very popular with Flowerona readers and I’m delighted to say that Katie has kindly offered to write guest posts on a regular basis.  And today, it’s the turn of the daffodil.

The story of the daffodil is one of poison, vanity, arrogance, the underworld, Greek legend & superstition.  Will you ever look at a host of golden daffodils in the same light again?! The Daffodil (Narcissus species) belongs to the Amaryllis family and has many quaint names around the country such as Lent Lily, Daffodily, Butter and Eggs, Hen and Chickens, Easter Rose & Yellow Maidens.

In the words of Shakespeare ‘what’s in a name?’  Well, quite a lot when it comes to the daffodil. There are many schools of thought as to where the name originated.  One such school is that daffodil originated from Affodyle, which means that which cometh early. That’s a much nicer version than it coming from the Latin affodilus…a plant that grew in the fields of the underworld and belonged to Persephone, the Queen of Hell. 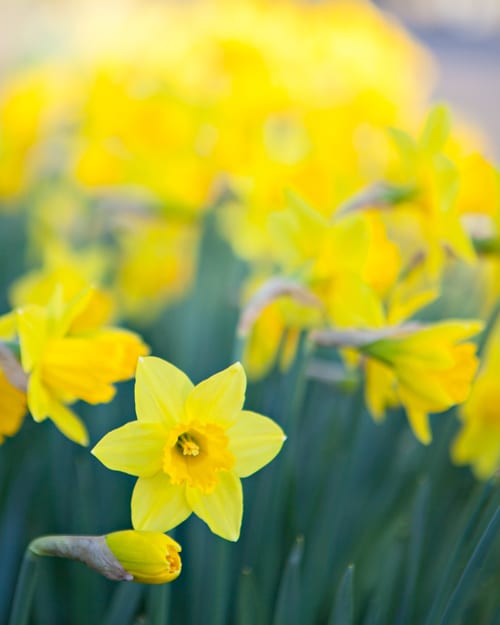 The botanical name of the genus Narcissus is often said to derive from the classical tale of Narcissus, who was blessed with eternal beauty.  The wood nymph Echo was madly in love with Narcissus, but she couldn’t tell him as she could only echo his last words. Sadly, she pined and faded away until all that could be heard of her was an echo coming from the trees. As revenge, Narcissus was tricked by the Goddess of Punishment, Nemesis, to look at his reflection in a lake, where he then fell in love with it.  He would return every day trying to catch a glimpse of the spirit in the water, not realising it was his own reflection. The drooping of the daffodil symbolises the image of Narcissus bowing his head to admire his image in the lake.  They say the centre of the daffodil is a cup filled with his tears. Some people therefore believe the daffodil represents vanity and unrequited love. This story led to the term Narcissism or a Narcissistic view, where people have an arrogant view of themselves and are constantly seeking attention and adulation. 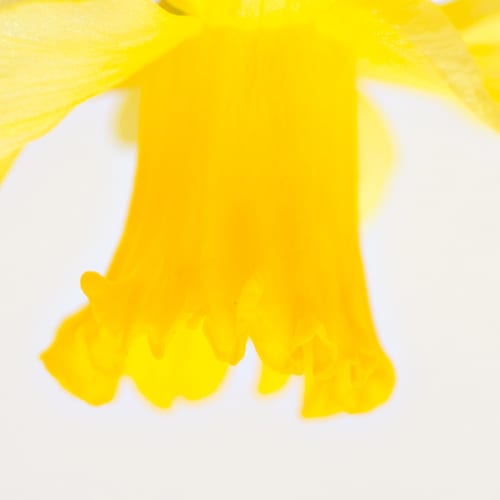 It’s more likely that the name Narcissus derives from the Greek word narkao (numbness) on account of the narcotic properties.  The bulbs are highly poisonous and if eaten, can cause vomiting. The bulb extract, if applied to an open wound, has caused numbness of the whole nervous system and heart paralysis.  The flowers are also slightly poisonous and the sap is toxic to other flowers.  As florists will know only too well, the sap can also cause dermatitis and irritation to the skin, known as ‘daffodil itch’.  This is from the Calcium oxalate in the sap.  This forms bundles of needle-shaped crystals, called raphides in the leaves and roots, which protect it from being munched by animals. 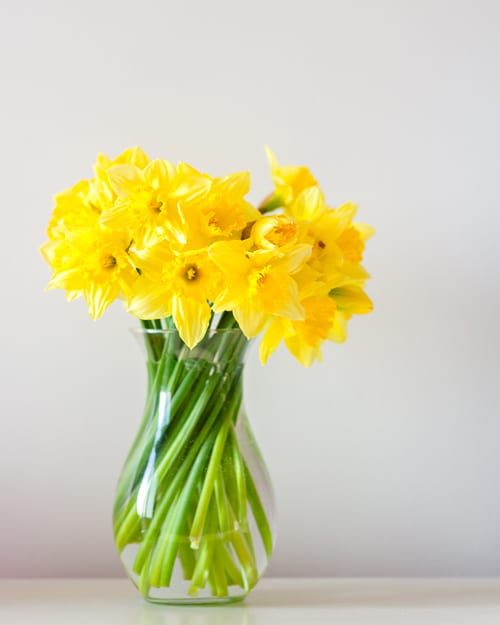 It’s not all doom and gloom though where the poor daffodil is concerned.  It also has many beneficial uses and was used in the olden days to relieve whooping cough and bronchitis, and as a poultice to heal burns and wounds. Wealthy women used the yellow flower dye to tint their hair and eyebrows.  Nowadays, it’s grown commercially in Powys, Wales for the production of Galanthamine, an alkaloid (also found in snowdrops) used in Alzheimer’s drugs. Daffodil compounds are also being researched as a treatment for depression at the University of Copenhagen. It’s even used as payment on the Isles of Scilly, as annually one daffodil is given to the Prince of Wales as rent for any unattended land. 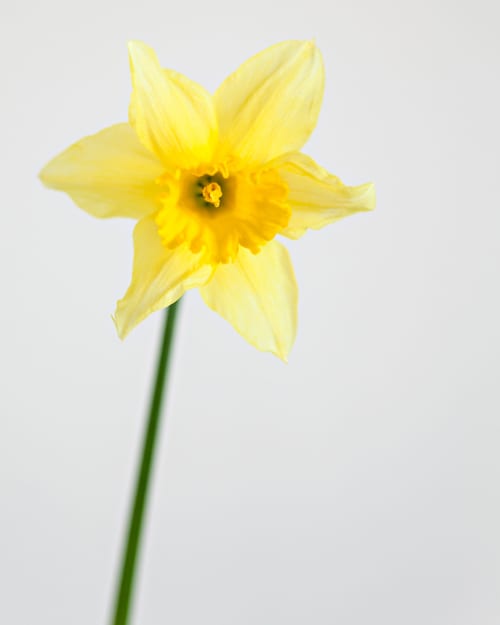 It’s a very auspicious flower in China. As the flower blooms in March, the month of the Spring equinox, it has become a symbol of Chinese New Year. If it blooms on Chinese New Year, it’s said to bring extra wealth and good fortune throughout the year.

Now, for anyone living on the Isle of Man, there’s a superstition that it’s bad luck to bring daffodils (goose herb) into the home, before the goslings have hatched.  In complete contrast to this, in Devon it’s believed the number of goslings that survive is decided by how many wild daffodils are in the first bunch of the season brought into the home.

Thank you so much to Katie for another great blog post. Aren’t her photographs stunning? If you live in the Hampton Court Palace area and would like to walk amongst lots and lots of daffodils this weekend, I highly recommend visiting the Wilderness garden. I was there yesterday and took this image…such a lovely spring scene!

A very warm welcome! My name is Rona Wheeldon and I’ve made it my mission to inspire and support the floristry industry. I’m passionate about this incredible sector and everyone involved, rooting for florists, flower growers and flower wholesalers.
END_OF_DOCUMENT_TOKEN_TO_BE_REPLACED

‘First comes thought; then organization of that

Back from my home county of Devon, after spending

‘First comes thought; then organization of that

Back from my home county of Devon, after spending